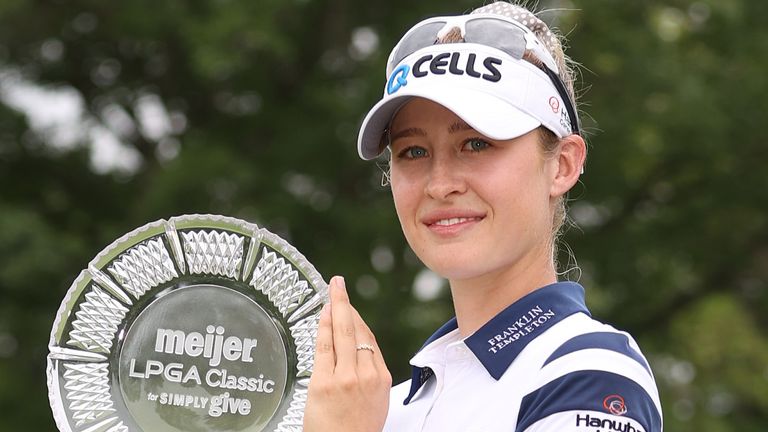 Nelly Korda came through a final-round tussle with Ireland’s Leona Maguire to register a second LPGA Tour victory of the season at the Meijer LPGA Classic.

Korda birdied her final hole to close a five-under 67 at Blythefield Country Club and finish two clear of Maguire, who stayed in contention throughout the day as she battled to a bogey-free 66.

“Leona’s a really good player,” Korda said. “Honestly, she kept me on my toes all day. I had to play good golf. There’s a lot of birdie opportunities out here. I started off a little rough, not hitting many fairways, but kept telling myself to battle through it and just to have fun out here.”

"I kept telling myself to battle through it and just to have fun out here." [email protected] after her fifth LPGA Tour victory pic.twitter.com/uJcrqXB18g

Starting the day three ahead, Korda cancelled out her birdie at the third with a bogey at the next to fall back to 20 under alongside Maguire, who made three consecutive birdies from the second.

Korda picked up a shot at the sixth but found herself level at the turn after Maguire birdied the eighth, only for the American to jump two ahead by firing her approach at the 10th to tap-in range for the first of back-to-back gains. The world No 4 bounced back from a bogey at the 12th to roll in a 12-foot eagle at the par-five 14th – where Maguire made birdie – and birdie the next to move three ahead with three to play.

A two-shot swing at the 16th saw Korda three-putt from inside 12 feet and Maguire make birdie to cut the American’s lead to one heading to the last, where a four-foot birdie took Korda to 25 under and gave her a two-shot win when Maguire finished with a three-putt par.

Victory was Korda’s fifth on the LPGA Tour and sees her become the first multi-winner on tour this season, following on from her Gainbridge LPGA title in February, with the win also moving her top of the season-long Race to CME Globe standings.

In Gee Chun carded a round-of-the-day 63 to end the week tied-third on 21 under with Brittany Altomare, with Sweden’s Anna Nordqvist five strokes back in fifth and former AIG Women’s Open champion Georgia Hall in a four-way tie for sixth after a closing 68.

‘Buckle up’ for scary and ‘fiery’ Augusta