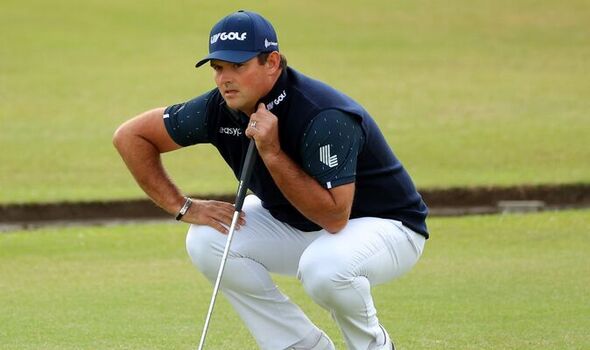 Patrick Reed has no fear of any backlash of his involvement with the controversial LIV Golf Series as he’s been flaunting the breakaway league’s logo all week at The Open and he continued to do so during his opening round on Thursday. The American golfer was seen sporting several logos on his clothing during his practice round on Wednesday, including a huge advertisement on his cap.

The LIV Golf Series has caused a divide in golf with the likes of Tiger Woods, Justin Thomas and Rory McIlroy all speaking out against those competing in the event. Both the PGA Tour and DP World Tour have handed out sanctions to players joining up to the Saudi-backed league.

But there currently hasn’t been any ban in place for those wanting to compete at the major championships who are also joining LIV Golf. This week there are 23 LIV Golf rebels lining up in the field at The 150th Open Championship.

The R&A have clearly made attempts to downplay LIV Golf this week with Greg Norman uninvited from the past champions dinner due to his involvement in the breakaway tour. And all LIV golfers were snubbed for the pre-tournament press conference scheduling, although others still faced questions on the matter.

But Reed, who has proven to be a divisive figure throughout his career, has gone against the grain in his clothing attire on the opening round at The Open. He once again donned a cap with the LIV Golf logo taking prominent place at the front while also having two more logos stitched onto his polo shirt.

Phil Mickelson, Ian Poulter, Bryson DeChambaeu, Brooks Koepka and Dustin Johnson are among those to have made the switch to LIV Golf. Reed announced his switch to LIV Golf last month during the final round of their inaugural event at Centurion Golf Club.

The 2018 Masters champion, who has won around £30million in prize money on the PGA Tour, explained at the time why he was making the jump. “It’s refreshing to see team golf again. It takes me back to college and Ryder Cup days,” Reed said.

As a past major champion, Reed is usually among the featured groups with the controversial figure often fighting at the top of the leaderboard. But, just like Mickelson and Poulter, Reed was snubbed by The Open and was given an early tee time while hardly any of his round was shown on TV.