Home » PGA Championship: Rory McIlroy says he ‘still has a way to go’ before he’s back in top form 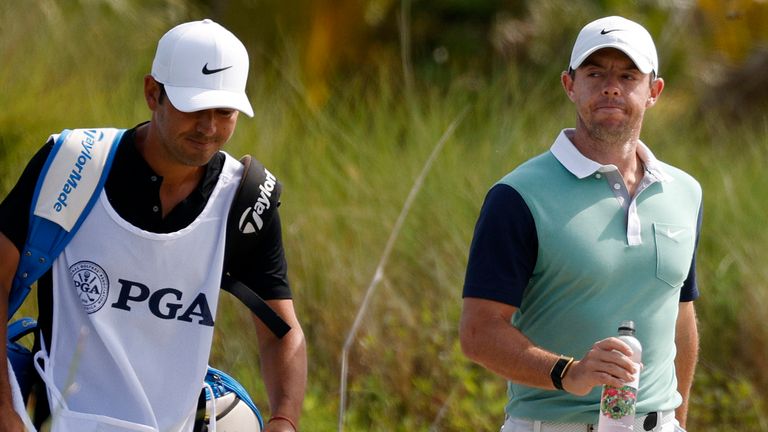 Rory McIlroy admitted he still has much work ahead of him to regain his best form as he reflected on a week of “very average” golf at the PGA Championship.

McIlroy was nowhere near the player that cruised to a record-shattering eight-shot victory in his last visit to Kiawah Island in 2012, and he never found the consistency to get into contention before rounding off a disappointing week with a 72, finishing on five over for the tournament.

His final round was symptomatic of his performance over the previous three days, with occasional flashes of brilliance interspersed with careless mistakes and a number of missed putts from short range as he mixed four birdies with as many bogeys. McIlroy arrived in South Carolina as pre-tournament favourite following his win at the Wells Fargo Championship earlier this month, but he found the Ocean Course more punishing than Quail Hollow when he did go offline.

After he signed his card almost an hour before overnight leader Phil Mickelson teed off, McIlroy vowed to continue rebuilding his game having revealed earlier this year that speed training sessions last autumn had a detrimental effect on his swing.

“More of the same, very average,” was his blunt assessment of his final round. “I couldn’t really get anything going and it was a day where you had to get off to a fast start. The first few holes were playing a lot easier than they have done, and I didn’t do that, just sort of got stuck in neutral.

“I still have a way to go with everything. I just need to figure out a driver, as well. I just haven’t driven the ball as well as I know that I can for a long time, and that’s really the foundation of my game. Once I’m driving it well, everything becomes so much easier.

Despite being the favourite with the bookmakers in the build-up, McIlroy insisted he had tempered his expectations of ending his major drought despite winning for the first time in 18 months at Quail Hollow – hit third victory in Charlotte.

“I didn’t understand those high expectations,” added McIlroy, who confirmed his next start would be at The Memorial in June. “It was good to get a win at Quail Hollow, a course that I’ve always played well on and am comfortable on.

“I didn’t feel like playing well here nine years ago was going to automatically make me play well again, and I felt like coming in here there were still parts of my game that I needed to sharpen up, and obviously those parts were exposed this week in the wind and on a tough course. “It’s different here. You go to somewhere like a Quail Hollow and you can hit bad shots and still go find your ball and play it and hit great recovery shots. Here is so penal that you can’t.

“I feel like you’ve got a little more freedom on those golf courses, and that’s really all it is. It’s a trust and a freedom thing. Once I have that, like I had that at Quail Hollow because you can do that, you can hit it in trees and get it out. You sort of can’t really do that here.

“You see hazard on one side and six-foot-high grass on the other side, so it’s hard to bail out anywhere. It was a good test this week to see where I was, and I still have a way to go.”

McIlroy’s erratic driving cost him dearly at the par-fives, making five bogeys on the long holes over the first two rounds as he battled to make the halfway cut rather than get into contention for the title.

“The par-fives were a killer,” McIlroy said. “I made five bogeys on the par-fives in the first two days. Especially on a par-72, those are the holes that you have to birdie. Even walking off there with pars is a disappointment, so to walk off there with bogeys is obviously even worse. I really put myself behind the 8-ball with that.

“I actually felt like I putted okay the first couple days and then over the weekend I started to miss a few. I started to over-read them a little bit and was sort of questioning my reads, a little bit of indecisiveness crept in.”

Paul McGinley: Will Rory McIlroy’s victory at Quail Hollow be the start of a major-winning season?