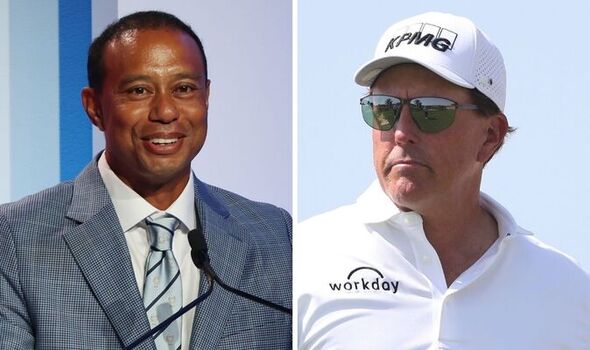 Phil Mickelson has been removed from the list of players set to compete at The Masters next week, but there is a subtle hint that Tiger Woods could be in contention to feature. Mickelson hit the headlines earlier this year for his strong views on the PGA Tour and showing support for the Saudi Arabian-backed Super Golf League fronted by Greg Norman.

A number of top golfers around the world were quick to distance themselves from the controversial Super Golf League. But Mickelson then found himself in hot water after comments surfaced where he called the Saudis “scary” and admitted to using his interest in the Super Golf League as leverage to get more out of the PGA Tour.

The American’s remarks caused uproar among his fellow professionals with Rory McIlroy calling Mickelson’s comments “naive, selfish, egotistical and ignorant”. Mickelson went on to release a lengthy apology last month and announced he would be taken some time away from the sport.

How long that self-imposed break would be wasn’t clear, but it’s now been confirmed that he will play no part in this year’s Masters. Mickelson has been removed from the list of active players set to compete, instead being named on the list of past champions not playing.

But one name missing from the latter list was that of Woods, who is yet to make his PGA Tour comeback since undergoing surgery after a horrific car accident last year. The 15-time major champion is yet to announce his plans for The Masters and has been coy on when he plans to tee up on the tour.

Woods has already confirmed that he will at least be at Augusta for the annual Champions Dinner.

“It’ll be a great dinner. I don’t know what kind of sushi we’re going to have,” he said.

The 46-year-old has dropped subtle hints on when he plans to return to the tour, but will pick and choose which events he plays. But Woods did also admit that he could feature in the Par 3 Contest at Augusta on the eve of the Masters.

“I can play that kind of stuff,” Woods said.

There have been some encouraging signs that Woods is progressing nicely on his return from injury. Late last month, footage emerged of him walking seemingly pain-free up the 52 steps to the clubhouse at Riviera.