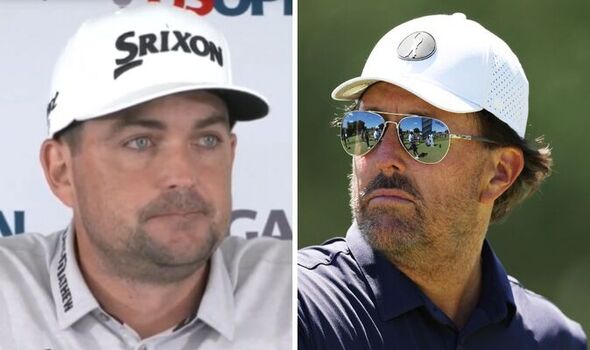 Keegan Bradley, who has never partnered with anyone other than Phil Mickelson in his two Ryder Cup appearances, has provided an insight into how the PGA Tour rebel should expect to be received by fans at The Country Club this week at the US Open. Mickelson is playing in his first major event since confirming his involvement in the controversial LIV Golf Series.

The American golfing icon has received a large amount of backlash for his decision to turn his back on the PGA Tour and make the switch to the Saudi-backed golf league. LIV Golf got up and running last week in Hemel Hempstead with the likes of Dustin Johnson, Sergio Garcia and Lee Westwood joining Mickelson in the field.

Each golfer faced tough questions from reporters about their decision to take part in the event. And Mickelson, playing in his first tournament since the Farmers Insurance Open in January, attracted the most attention of anybody.

The 52-year-old is now back competing against his usual PGA Tour rivals this week in the US Open. There has been some suggestions that Mickelson will face a hostile reception when he steps onto the first tee later today.

JUST IN: US Open 2022: How much Rory McIlroy can win compared to LIV Golf

But Bradley, who holds a 4-1 record playing alongside Mickelson in Ryder Cups, claims the atmosphere around his compatriot has been largely supportive.

“I was putting on the first tee [on Monday] and Phil was getting ready to tee off, and he got a monster ovation,” he said. “People cheering and Phil was giving the thumbs up to everybody.

“I think he is going to be just fine. It sounded like the same Phil Mickelson with the crowd as I’ve always heard.”

Rory McIlroy, Justin Thomas and Jon Rahm have been outspoken against those leaving to play in the LIV Golf Series and Bradley has responded to the trio’s “hard stance”.

“They’re very adamant in how they feel about everything,” he added. “It’s a good thing all three of them are incredible players.

“They’re three of the best players in the world. They’ve taken a pretty hard stance and they’re just talking about what they believe in and they have that right, for sure.”

Tiger Woods gets a sand art tribute at St. Andrews