RIATH AL-SAMARRAI: Ian Poulter is mining success from silence after hushing his critics with a 160-foot putt at The Open… LIV and let die? He and the rest of the Saudi golf rebels won’t do so quietly

Would there be a more awkward scenario for those in golf’s establishment than an Open winner plucked from the breakaway bunch?

It’s far too early for such predictions, of course, but those of a Machiavellian temperament might have enjoyed seeing so many of Greg Norman’s mates covering the first page of the leaderboard. 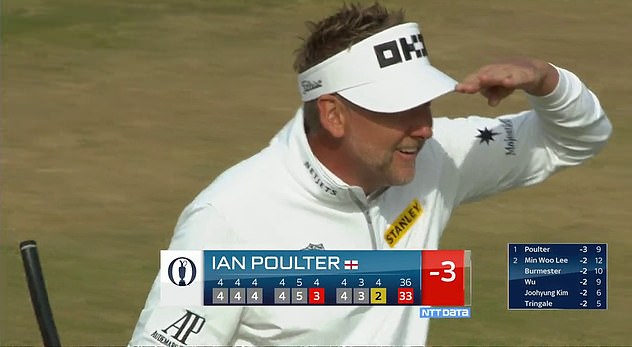 Lee Westwood, Dustin Johnson, Poulter, Bryson Dechambeau, Talor Gooch – they all took the Saudi cash, triggering this civil war, and each was deep in the red after some compelling golf and punchy interviews.

LIV and let die? Not quietly, they won’t.

And that takes us back to Poulter, who was on the tee at 7.08am and jeered as he went. Only a small number of the large gallery made that protest, but they made a decent noise, even if Poulter did later claim he didn’t hear a thing. None of the other 24 defectors received such treatment, and none went on to have quite such a dramatic round either, with Poulter promptly snap-hooking his iron off the peg.

It went so far left he missed the widest fairway in major golf and was only five feet short of being out of bounds. From there he salvaged a par, picked up a birdie at the sixth and then yielded the roar of the day at the ninth, when he lined up a 162ft putt and holed for eagle. It was the longest ever made in professional golf, eclipsing the 111 footer dropped by Craig Barlow at the Buick Open in 2008. 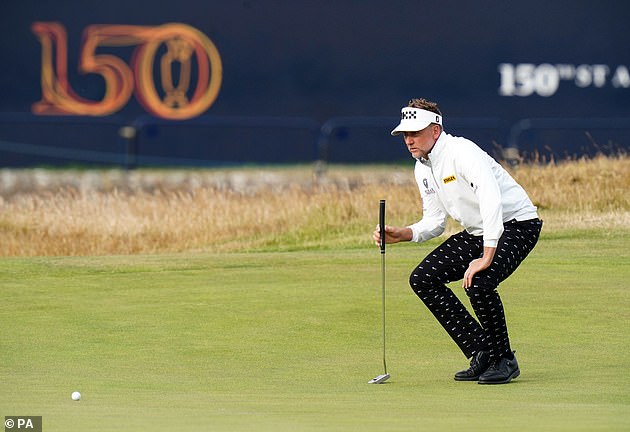 He eventually closed on three under, one shy of his Ryder Cup colleague from stabler times, Lee Westwood, who along with Johnson and Gooch led the LIV charge. After his round Poulter insisted he hadn’t heard the boos, saying: ‘I actually thought I had a great reception on the 1st tee. All I heard was clapping.

‘You lot can write whatever you like about being heckled and booing.’

The line was delivered with a smile, but it did play to the feeling that those who have been central to golf’s ugliest row are selective in their hearing in this debate.

For his part, Poulter is trying to mine success from silence, admitting he is now deliberately avoiding the negative narratives of the saga, which includes the damning criticisms made this week by Tiger Woods and the R&A’s chief executive Martin Slumbers.

‘I don’t play very well distracted,’ Poulter said. ‘Separating myself away from that has obviously been a good thing.’

Certainly for his putting, it would seem. Whatever else is said – and that contains the question from one journalist here of whether ‘Old Tom Morris would turn in his grave’ had he witnessed golf devouring itself – it was a truly remarkable putt. (For those interested, Poulter’s answer was: ‘I have no idea.’)

Westwood, who doubled the second but still carded an excellent 68, was in a spiky mood with reporters. After accusing the media of ‘stoking up’ elements of a situation created entirely by golfers, administrators, a state in need of reputational washing and Greg Norman, he was asked his view of comments made by Woods, who had said LIV players ‘turned their back on what allowed them to get to this position’.

You would think so. 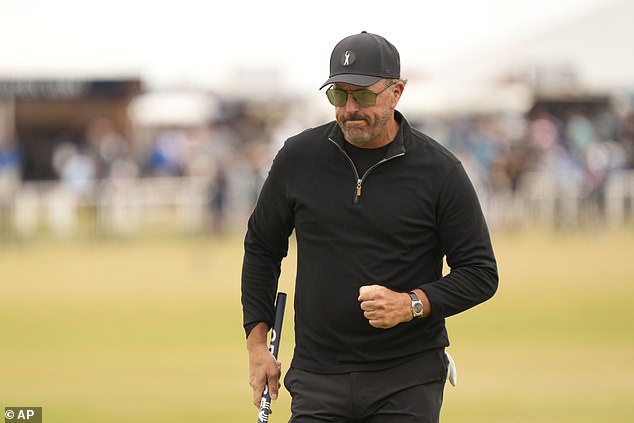 That so many of the LIV golfers had a strong day went against the notion they are too old or ailing or irrelevant to have been a great loss to the traditional tours. Johnson and Gooch proved as much in loops of 68, while Dechambeau was ominously placed after a 69. Paul Casey briefly got to four under before giving three back. Patrick Reed, coated in LIV logos, was level par.

The highest profile of them, Phil Mickelson, also finished on even, before disputing a claim from the R&A that his absence from their champions’ dinner earlier in the week had been at his own instigation. He said: ‘The R&A contacted me a couple weeks before and said, “Look, we don’t think it’s a great idea you go, but if you want to, you can”. I just didn’t want to make a big deal about it, so I said, “Fine”.’

After being pushed a couple of times for more details, he snapped: ‘Let it go, dude.’

If the leaderboard shows anything, it is that this issue is going nowhere.