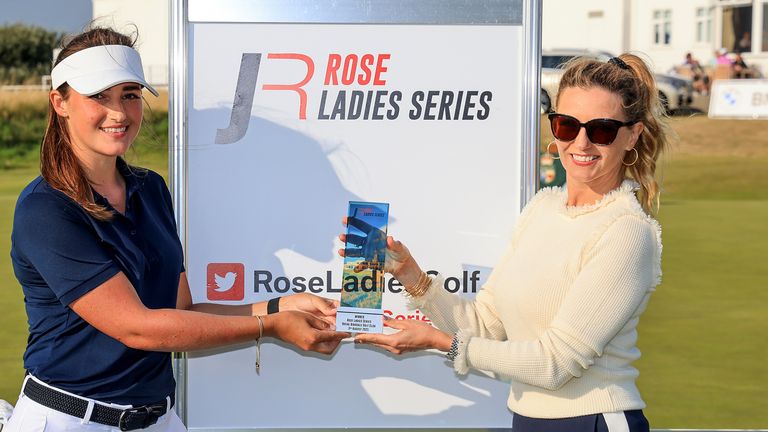 Gemma Clews and Jae Bowers are the latest players to add their names to a list of first-time winners during a bumper week of Rose Ladies Series action.

The 2021 schedule offers increased playing opportunities and prize purses for female golfers across the UK, with four 18-hole events taking place in a busy six-day stretch this week at four recognisable venues.

Clews claimed bragging rights with a dominant five-shot victory at Hillside on Monday, before Bowers came through a three-way play-off to enjoy success at Royal Birkdale the following day.

The series heads to JCB Golf and Country Club on Thursday before going to Scotland for the first time at Scotscraig Golf Club on Saturday, with the final two events taking place next month ahead of the Grand Final at Bearwood Lakes on September 25.

Clews mixed six birdies with a lone bogey during her impressive display at Hillside, with three birdies in a five-hole stretch from the 11th and another at the last seeing her post a five-under 67 and a convincing victory.

Lauren Horsford led earlier in the day but bogeyed two of her last three holes to slip into tied-second on level par alongside Sarah Gee – who birdied her final three holes – and Sophie Stone.

Bowers finished seven strokes back in tied-seventh after a two-over 74, only to reach the winner’s circle in dramatic fashion a day later after defeating Horsford and Channette Wannasaen in extra holes.

Jae Bowers wins the @RoseLadiesGolf at @royalbirkdale_ with this birdie on the 2nd play-off hole! pic.twitter.com/KKPvZyD6KN

The three players all posted a four-under 70 at Royal Birkdale to share top spot, with Bowers carding five birdies and a bogey in regulation before sealing victory with a six-foot birdie on the second play-off hole.

Highlights from every Rose Ladies Series event will be shown on Sky Sports Golf and on the Sky Sports Golf YouTube channel, with 30 minutes of coverage from Hillside available on Friday and from Royal Birkdale on Saturday.