Jersey City, New Jersey: A horror tee shot from Cameron Smith has seen Tony Finau end a PGA Tour drought which had lasted more than five years and 142 tournaments at the rain-delayed Northern Trust Open in a play-off on Monday (Tuesday) AEST.

On the 18th in the play-off, Smith hit such a wild drive that it sailed over the retaining wall that separates Liberty National from the edge of the Hudson River. Finau had already pounded his drive down the middle of the fairway, and at that point the fight was effectively over.

Finau was three shots out of the lead when he ran off a birdie-eagle-birdie stretch at Liberty National, the last one a 30-foot putt across the 14th green. He closed with a 6-under 65.

Smith had a rally of his own with two late birdies, missing a 25-foot birdie chance on the 18th in regulation that would have won it. He closed with a 67.

That was as close as the Australian came to winning. His opener to the play-off offered Finau just what he needed — no drama, and more importantly, a victory.

Finau banked just over $2.37 million with his win, with Smith pocketing just over $1.4 million. 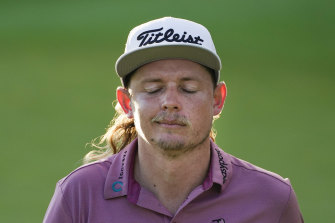 Cameron Smith after his missed putt cost him a chance at outright victory on the 18th.Credit:AP

Since winning the Puerto Rico Open in the spring of 2016, Finau had eight runner-up finishes, three of those in a play-off, and 11 finishes in the top three.

Now, one of the most likeable players in golf goes to the top of the FedEx Cup standings and No. 8 in the Ryder Cup standings with one week left to be among six automatic qualifiers. Even if he doesn’t make it, it will be tough for US captain Steve Stricker to keep him off the team.

He was the guy who did everything right but win, and now that burden was lifted.

Finau, who had to save par from the bunker with a six-foot putt on the 18th in regulation to finish at 20-under 264, only had to two-putt for par in the play-off. 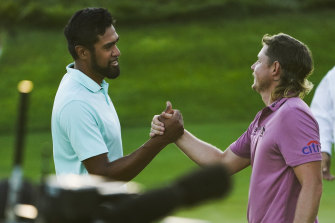 He lifted his head to the sky and fluttered his lips in sheer relief.

“It took just about everything I had,” he said.

And it took some help from Smith, who two weeks ago lost a chance to win a World Golf Championship with a wild drive on the 18th.

Rahm looked to be in control all afternoon, even as Finau began his big run. The world’s No. 1 player was bogey-free, made birdie on all three of the par-fives and threw a wedge into three feet for another birdie.

It came undone quickly, though. Rahm’s tee shot found the bunker on the 15th and he missed a six-foot par putt. On the reachable par-four 16th, he caught all ball with a pitch that sailed 30 feet by the pin and cost him an easy birdie.

He didn’t get another look at birdie over the final two holes, saving par from a bunker on the 17th and having to lay up from a fairway bunker on the 18th, where he closed with a bogey and a 69 to finish alone in third.

“I haven’t been able to digest it,” Rahm said after his round. “My son put a smile on my face so at least I’m not in a terrible mood.”

The final round was postponed on Sunday as Hurricane Henri approached, and the edges of what became a tropical storm at landfall dumped more than six inches of rain on Liberty National. There was another four-hour delay in the morning and spectators were kept away.

They missed quite a show, and a popular winner.

Danny Willett: Jordan Spieth was brilliant to me after Masters win