It’s the most famous little patch of sand in world golf, a little bunker about six metres wide and not quite four metres long. It has a face a little more than a metre high.

But while it might be small in size, the famous sand trap on the “Road Hole” at St Andrews has brought many a prospective champion to their knees.

Most famously, Japanese professional Tommy Nakajima was contending for the British Open in 1978 when his ball spilled into the sand protecting the 17th green during the third round. It took him four shots to escape the bunker, and that was that. The savage British press later dubbed the bunker “the sands of Nakajima”.

David Duval, during The Open in 2000, took four shots to extricate himself from bunker hell, and surely felt like walking down the road that straddles the hole and never returning.

And so, with his chance of winning a milestone edition of The Open, the 150th at the home of golf, and his ball nestled below the Road Hole bunker, Australian Cameron Smith had a choice: audaciously chip over the bunker, or snake a putt alongside the camber and hope it doesn’t skew back into the sand?

Smith, one of the world’s best short game players, reached for his putter and then walked a tightrope on a line which just allowed his ball not to funnel back into the bunker. It had enough speed to roll up into the heart of the green, and then he made a clutch par from 12 feet. He went on to win The Open by one shot from American Cameron Green.

“I was basically just trying to get it somewhere on the green,” Smith said. “The putts were just falling for me and I felt really comfortable. I just needed to get inside 12 or 15 feet, and I thought I was going to hole it. It was a good spot to be in.”

Did he consider reaching for the wedge for a chip over the bunker?

“I did,” Smith said. “It was back into the wind and I thought if I had a good enough lie I could land it over there and get it closer. It was just a risk I don’t think I was willing to take.”

Remarkably, Smith’s (20 under) tricky situation was brought about by his only poor shot of a scintillating bogey-free final round eight under 64, which surged him to a one-shot lead over American Cameron Young to win the Claret Jug and his first major. Third round co-leader Rory McIlroy was a shot further back in third, having started the day four shots ahead of Smith. 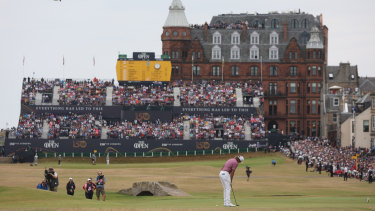 The Road Hole bunker might not even be the most daunting obstacle on what has officially been labelled world golf’s hardest hole.

Golfers have to hit a tee shot over a hotel adjacent to the 17th, and then weigh up a knee-knocking approach on the 451-metre, par-four hole. It’s ranked the hardest hole on the course, and scored at an average of 4.46 for the tournament. Given its scoring average compared to other holes on the PGA Tour and old European Tour, it was deemed the most difficult hole in the sport in 2015.

It’s the second time Smith has made his mark on the 17th hole in the final round of a breakthrough win. He arrowed in an ambitious approach to the island green at TPC Sawgrass during his win in The Players Championship earlier this year.

“Two iconic holes of the game,” Smith said. “It’s awesome. I love it.”