Team USA golfers Justin Thomas and Daniel Berger are accused of ‘breathtaking, monstrous arrogance’ after downing BEERS on the raucous first tee at the Ryder Cup, then throwing the empty cans on the turf

Video footage has emerged of Team USA’s Justin Thomas and Daniel Berger both downing beers at the Ryder Cup, a bullish move which has been heavily criticised by outraged viewers.

Both golfers fed off a wild crowd on the first tee ahead of Saturday afternoon’s fourball matches, and promptly finished two cans thrown down to them from the grandstands.

Thomas bent down on one knee to drink his beer then smashed his empty can into the ground before roaring to the crowd and whipping them into a frenzy as they chanted ‘USA, USA, USA’.

At the time, the hosts were leading 9-3 heading into the session, leaving Team Europe standing on the brink of an emphatic defeat.

Sportsmail‘s golf correspondent Derek Lawrenson, reporting from the course at Whistling Straits, has described the act as ‘breathtaking, monstrous arrogance’.

And the show of bravado has been met with an equally scathing reaction from spectators on television, who have hit out at Thomas and Berger. 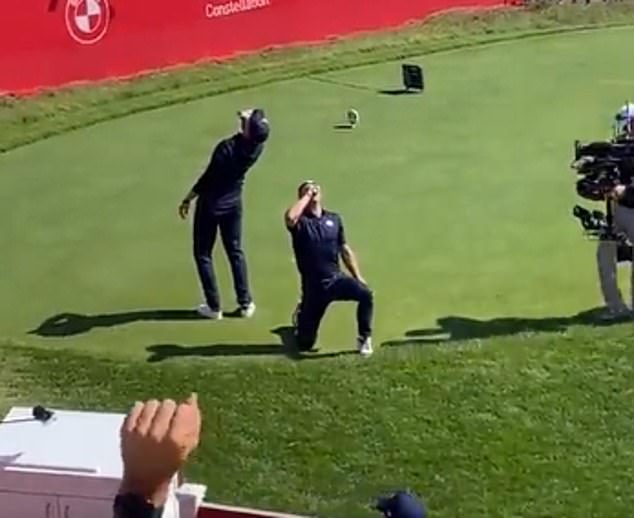 ‘The single most disrespectful thing that I have ever seen on a golf course,’ one furious Twitter user said.

‘Europe have virtually no fans there yet your guys celebrate early like that, absolutely appallingly (sic) behaviour, no class.’

‘Not really in the spirit of the Ryder Cup though, is it?’, a frustrated third viewer posted.

A fourth person believes the display was ‘exhibit 50000 of Americans having absolutely no class when it comes to golf.’

And another user agreed, writing: ‘Not very classy, and didn’t even do it properly, at least a third of that tin splashes over the tee.’

‘Every time the US have a strong Ryder Cup (not often) they let themselves down with a lack of humility in the win,’ a sixth said. 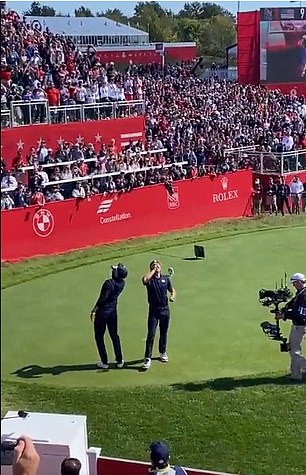 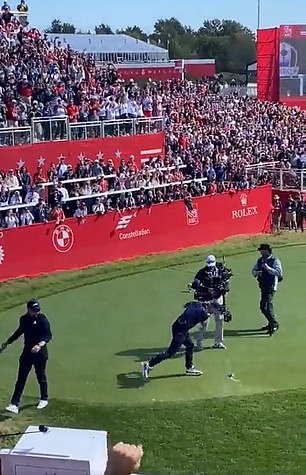 Thomas and Berger were informed that they would sit out for the fourballs, and soon appeared down on the opening tee to soak up their acclaim.

Walking over to thank those in attendance in the grandstand, they then decided to try and fire up the home faithful even more.

They duly succeeded by picking up the cans tossed over to them and finishing them off after chants of ‘chug a beer, chug a beer’.

Thomas clattered his empty drink down in delight, leading to yet more roars from spectators braced for Team USA’s victory to be confirmed today. 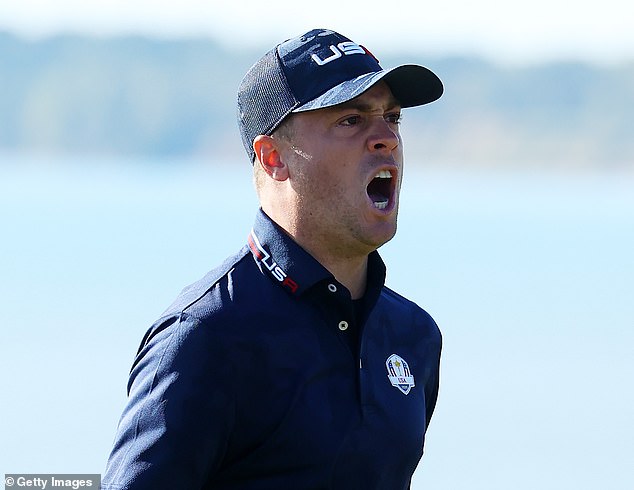 Thomas delivered a passionate display on day two, having also won in the morning foursomes

Both men had also thrown beers into the gallery themselves, a stunt met with widespread approval from those in attendance.

Cries of ‘USA, USA, USA’ soon rained down towards the two golfers, with the confidence across the board for the hosts in Wisconsin tangible.

The morning foursomes saw yet more misery for Europe, who now find themselves 11-5 down heading into the final day and must defy the odds to avoid defeat.