First handed out in 1971, the Haskins Award is given to the most outstanding collegiate golfer in the US. Ben Crenshaw won the first three. The Haskins people don’t pick too many duds; Phil Mickelson is another three-time recipient. 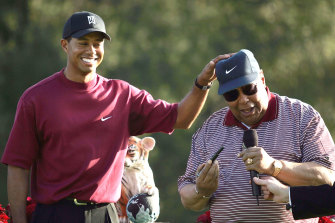 It’s not obvious why Earl Woods was front and centre at a ceremony honouring his son. Once Woods snr eventually finishes, the producers jump cut to the CCTV footage of Woods, handcuffed and dishevelled, pacing back and forth inside a Florida jail cell. As you’ll recall, Woods was arrested in 2017 for driving under the influence, of what was later determined to be a veritable cocktail of painkillers, sleep-inducing drugs and other junk. Hardly Earl Woods’ idea of humanitarianism.

Juxtaposing Earl’s words and Tiger’s caging is simultaneously sharp, complete and unsettling. Tiger Woods hasn’t brought any special kind of humanitarian excellence to the world. Nor has he done anything to cause the world to be a remarkably better place to live in.

Actually, the world is properly up shit creek without a paddle, right as I write this. That’s not one iota on Tiger Woods of course, but nor could it ever have been said with a straight face that he would change the world. It was manifestly wrong and unfair that Tiger Woods ever had such predictions placed on his shoulders; he was, and always will be, a golfer. The greatest golfer to ever walk a fairway, but a golfer only.

Watching Tiger is drastically uncomfortable, yet absolutely compelling. And you end up asking the obvious question: did Earl Woods cripple his son by taking the lead in developing him into an indefatigable, dominating assassin inside the ropes? 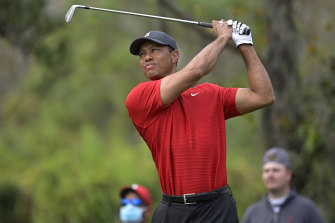 Woods in action at the PNC Championship in Florida last month.Credit:AP

Moreover, was it ever really about Tiger or Earl? Earl, who seems as though he lived in a sort of Disneyland inside his own mind; the Earl who, by all reports, torched pretty much everyone who was no longer of use to him.

If Tiger is the greatest golfer that’s lived (and for mine, he is) then the essence of greatness can’t be assessed through statistical analysis in isolation and nor does it matter if he transformed humanity.

Instead, greatness must also be referenced against absolute dominance and the singular ability to achieve what can’t hitherto be conceived.

At 14, the Romanian gymnast Nadia Comaneci transcended her sport, at the Montreal Olympics of 1976. Simone Biles will win more gold medals than she has fingers on her right hand – should the Olympics proceed as planned – but if she does, she still won’t touch Comaneci’s rarefied air.

Ayrton Senna will forever be the greatest racing driver who’s lived, yet Alain Prost, Lewis Hamilton and Michael Schumacher have each more than equalled Senna’s three Formula One world championships. Had Senna not been killed at Imola in 1994, my view is that he would’ve retired at the end of that season, still with only three world titles. Senna, however, would still have been the best driver in history, just as more than 50 players have now scored more career Test runs than Donald Bradman did.

About those who are the “greatest”, there’s an element of the intangible; something other-worldly. Is Woods greater than Jack Nicklaus? Yes, and I’d debate that one with anyone. Tiger in full flight is like nothing I’ve witnessed in sport. Tiger dominated in an era where technological advances transformed also-rans into serial contenders, whereas in Nicklaus’ era of butter-knife 1-irons, most pros couldn’t contend.

It's well chronicled that Tiger Woods is a clearly flawed and imperfect character, but who isn’t? Don’t you want your heroes to be human? The last thing you want is for athletes to be perfect. Give me an athlete who’s ragged, imperfect and human any day. Because that’s real; perfection is a mirage.

Tiger is perfectly imperfect, but who asked him to be anything else, apart from Earl Woods? Maybe Nike, who manufactured the fable of Woods’ deiform image two decades’ ago, but that’s about it.

I’m thankful I’ve lived through the era that Tiger dominated. He changed golf; he didn’t transcend it. But I’m even more thankful that Tiger didn’t bring a new type of humanitarianism to this blue planet. And I’m glad that the world hasn’t become a better place to live by the mere virtue of Tiger’s presence.

Because Earl Woods’ words were nonsense, and it wasn’t Tiger’s job to make the world a better place. He’s a golfer.

The Masters: ‘Limited attendance’ planned for Augusta National in April