Home » Golf » US Open: Rory McIlroy and Bryson DeChambeau just two off the lead after third round at Torrey Pines 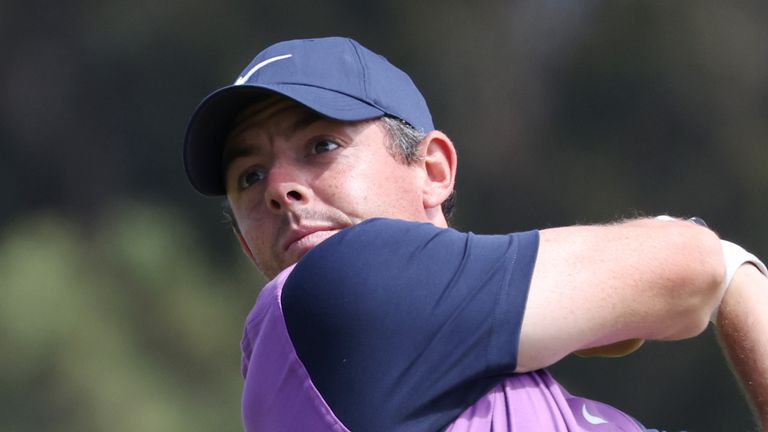 Rory McIlroy and Bryson DeChambeau head into the final round of the 121st US Open just two shots behind as Louis Oosthuizen’s huge eagle putt at the last earned him a share of the lead at Torrey Pines.

Oosthuizen’s thrilling finish hauled him level with Mackenzie Hughes and Russell Henley on five under par, but the majority of the focus on Sunday will be on the group at three under after McIlroy fired a high-quality 67 and DeChambeau returned a bogey-free 68.

Richard Bland’s hopes of a fairytale major victory at the age of 48 took a hit as he stumbled to a 77 to slip six strokes off the pace, while Jon Rahm and Dustin Johnson are within touching distance of the leaders along with the exciting young American trio of Matthew Wolff, Collin Morikawa and Xander Schauffele.

Hughes looked too far back to challenge when he turned in one over, but the Canadian vaulted into the mix with a riveting back-nine charge which began with a birdie at 11 followed by a 60-foot putt for eagle from the back of the 13th green, almost a carbon-copy of the famous Tiger Woods eagle from the same position in 2008. 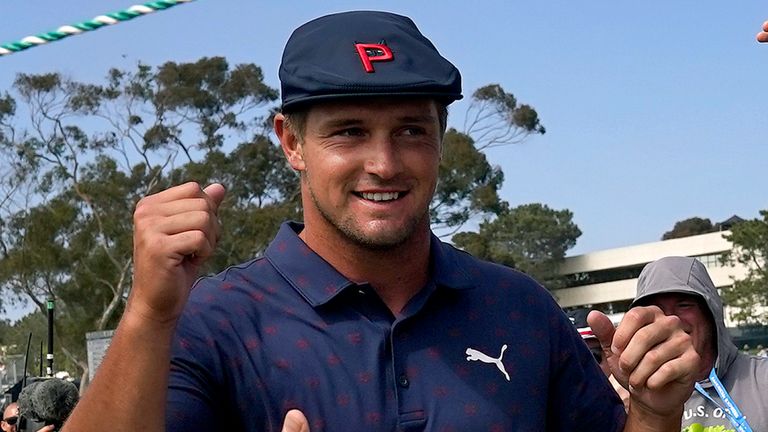 A birdie at the last capped a 68 and gave him the clubhouse lead which he was soon sharing with Oosthuizen, who was two over for the day with three to play before he drained a 30-footer for birdie at the short 16th and holed from twice that distance on the final green to prompt one of the biggest cheers of the tournament.

“I think a year ago that would have been a very boring eagle with a few people going nuts,” said the South African. “But that was nice to see everyone back, having fans back, and those reactions don’t happen all the time, and it’s great to hear the crowds.

“It’s great to hear the cheers when you hit good shots, but sometimes not great hearing the boos and the things when you hit a bad one! That’s why we play the game, to have reactions like that on 18, and to have people watching us. It’s great having the crowd back. Definitely if you’re playing well, you feed off the crowd a lot with energy.” 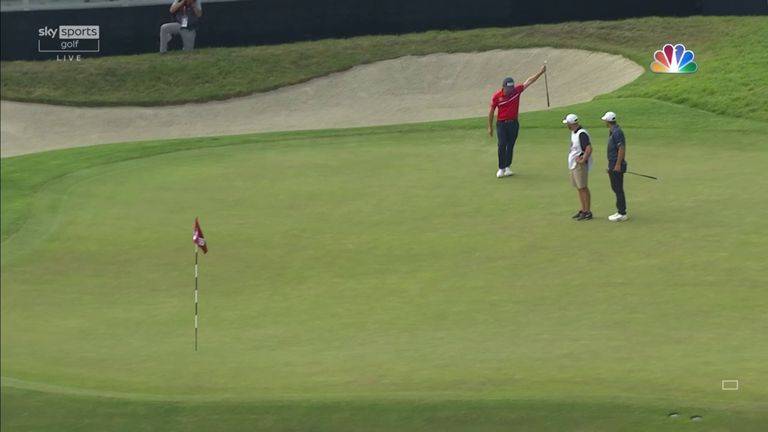 Oosthuizen’s sparkling finish sealed a 70 and boosted his chances of ending his long quest for a first victory on American soil, while overnight joint-leader Henley got to six under on four occasions during his third round, but each of his four birdies was offset by a bogey.

Henley did well to save par from sand at the last and remain tied at the top ahead of the star duo of McIlroy and DeChambeau, who both embraced the need for patience and course-management to maintain their challenges.

McIlroy made good on his vow to cut out the careless mistakes after littering his card with seven bogeys in his second-day 73, displaying tremendous resolve to drop only one shot in a round he hailed as “one of the best I’ve played in a while”. 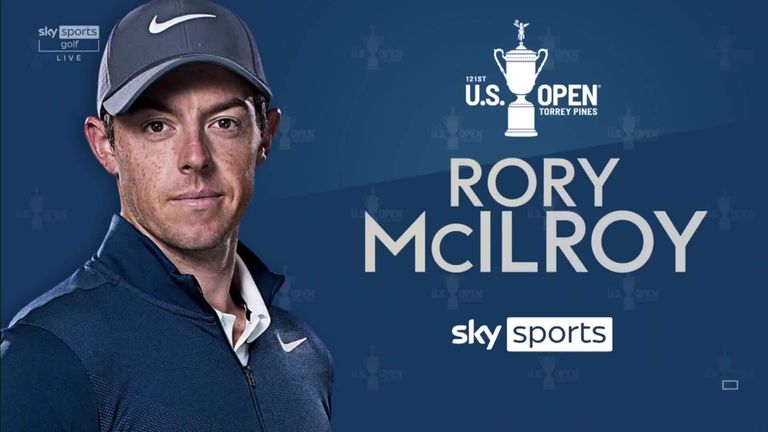 He birdied the second and parred his way to the turn before picking up three shots in four holes, including a sublime pitch-in from the rough at the 12th and an excellent four at the long 13th having hit the flagstick with his arrow-straight 260-yard second shot.

A poor drive at the 15th threatened to derail his challenge as his ball took a big bounce off a cart path and disappeared into a canyon among the rattlesnakes, but a brilliant up-and-down rescued a bogey and he holed another clutch putt for par at 16 before two-putting from 60 feet for his third birdie of the week at the last.

McIlroy was soon joined on three under by DeChambeau, who enhanced his bid for a successful defence of his title with a bogey-free 68 in which he impressed himself with his “attitude and patience level”.

DeChambeau made birdie at the first and added another at the sixth, but he made only one more at the long 13th as he settled for a succession of steady pars that kept him in with the chance to emulate bitter rival Brooks Koepka and win back-to-back US Open titles.

Rahm, who needs a win to dethrone Johnson at the top of the world rankings, was just three off the lead when he made a mess of the 14th and ran up a double-bogey six, but he regained his composure and put together a good run of pars before a two-putt birdie from long range at 18 lifted him back to two under.

The Spaniard is tied for sixth with Scottie Scheffler (70) and last year’s runner-up Wolff, who bogeyed two of the last five holes in a disappointing 73, while Johnson and Morikawa are among the 13 players to complete 54 holes under par for the tournament. 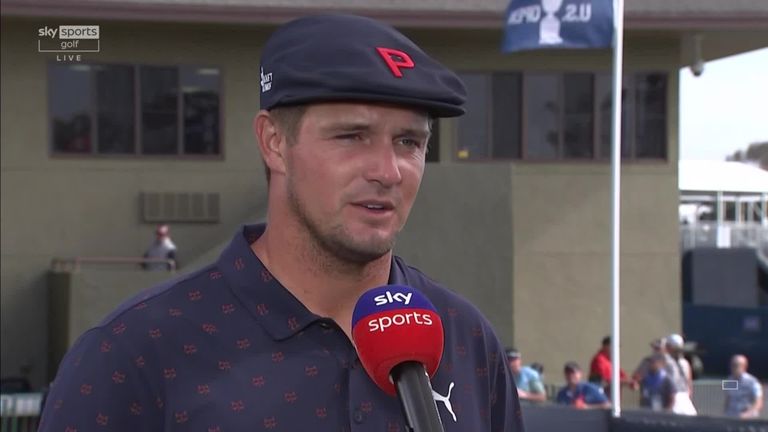 Paul Casey gave early encouragement to the later starters as he fired a 67 to move within five of the lead having made the halfway cut with nothing to spare on four over, while his fellow Englishman Ian Poulter is also level par after an excellent 68.

Their Ryder Cup team-mate Francesco Molinari bounced back from Friday’s 76 with a 69 to join the star-studded group on level par which includes two-time champion Koepka and world No 2 Justin Thomas, who both returned 71s.

Jordan Spieth will look to put early pressure on the leaders when he begins his final round six shots behind, along with 2014 champion Martin Kaymer (69) and former world No 1 Lee Westwood (71), with Bland dropping to one over after he bogeyed five of the last eight holes.

PGA Championship projected cut line: What will the cut be, how many players can make it?