The bill for Major League Baseball’s biggest outbreaks of COVID-19 has come due. And the St. Louis Cardinals, Miami Marlins and Philadelphia Phillies will foot most of it.

The Cardinals and Marlins were ravaged by the novel coronavirus at the start of MLB’s 60-game season, jeopardizing the game’s competitive equity and putting those teams far behind their peers in the games played department.

Yet, as the league tightened its health protocols further and extended the caution when a positive test occurred, the season churned on, against the early odds, toward conclusion.

Now, those three teams, idled for weeks in August, will gorge on baseball over the final 17 days leading to the regular season’s Sept. 27 conclusion.

The Cardinals, who saw 10 players and eight staff members test positive for the coronavirus in early August, are in the midst of 32 games in 27 days, and on Thursday completed a span of three doubleheaders in six days. Their final scheduled off day came Wednesday, which means they’ll play 18 straight days to finish the season.

The Marlins saw 18 players and two coaches test positive during the league’s first outbreak in late July and August, forcing an almost entirely new squad into action. Now, the replacements and the recovered have joined forces for a grueling conclusion: Miami’s final off day was Sept. 3 and will finish the year with 28 games in 24 days, including 14 games in 10 days beginning Friday.

The Phillies, like the Marlins, were idled from July 27-Aug. 3, since they were the opponent when the virus was rumbling through Miami’s clubhouse and sat out so exhaustive testing could be completed. Now, they’re finishing with 30 games in 27 days and, like the Marlins, will play three doubleheaders between Sept. 11-18.

Mind over matter? These clubs have turned it into an art form.

“The only thing we can control,” Marlins slugger Jesus Aguilar said Thursday, “is don’t think too much about what’s happening.”

Amazingly enough, plenty is at stake for all three teams, who each enter the weekend holding down a playoff position. 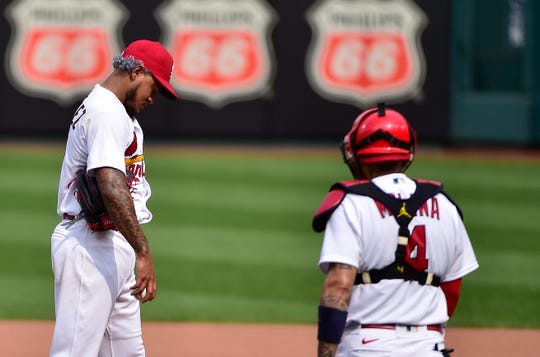 In a strange twist, the COVID-related cancellations created a huge series this weekend: Phillies at Marlins, for seven – yes, seven – games.

“This is a first. A seven-game series,” says Marlins manager Don Mattingly before his club opened the super-set with a 7-6 comeback win Thursday night.

Hopefully, not too ugly and injurious.

The Thursday series opener will be followed by a doubleheader Friday, and single games Saturday and Monday sandwiching a Sunday doubleheader.

MLB’s single-season exemptions for 2020 that include seven-inning games in doubleheaders, 28-man rosters and a 29th man for doubleheaders will help. Yet a watchful eye will be kept on every dragging arm.

“You’re going to basically play five games in like 50 hours. That’s physically grinding,” says Phillies manager Joe Girardi. “I do worry about both of those things and we just gotta pay attention to what our players are telling us verbally or non-verbally and try to get them through this stretch.

“When you have have two doubleheaders in one series, it’s really a grind. A lot of times when there comes physical and mental fatigue, there comes injuries, and that’s what you worry about the most.”

The Cardinals’ crucible comes next week, when they play eight games between Monday and Friday, including three doubleheaders – two against the Milwaukee Brewers, who trail them by two games for second place in the Central.

“Credit goes to this group in the first wave of this,” Cardinals manager Mike Shildt said Thursday. “They work smart and they’re also mentally tough, which helps. We want to put our best foot forward, but make sure guys are rested as we move forward in this next unprecedented stretch. We know guys are not close to 100% but giving us what we have.

“This group has done a good job staying in the moment. It can be a little daunting if you look at it. So you think, today is what we have, today is how we compete.”

They all know all too well that today can be taken away. In the season’s first weekend in Philly, the Marlins lost three-fifths of their starting rotation, their starting catcher, team leader Miguel Rojas and 11 other players.

Most of them are back, joined by several players suddenly thrown in the fire in early August. They all hope it’s made them mentally tougher – and impervious to this final, unprecedented grind.

“You get tighter as a group like that. Keep it simple. It’s the easiest way to go through it. And I think our guys are pretty good at it.”

After two teams showed interest months ago, no action on Colin Kaepernick front