DURHAM, N.C. — Duke men's basketball coach Mike Krzyzewski condemned the actions of rioters at the U.S. Capitol earlier this week, calling it an "insurrection" and that those involved should be prosecuted and the politicians who fanned the flames of violence chastised.

"The sorriest day outside of 9/11, shootings at schools where kids have gotten shot and killed. … I know everyone went under desks at the Capitol. I'd like to ask how many times teachers have had to do that at schools when there's gun violence.

"Wednesday was a horrible day. It was an insurrection. It went to the very fabric of this great country," said Krzyzewski, a West Point graduate who rose to the rank of captain before leaving the Army almost 50 years ago. "The symbol of our democracy is that Capitol, and we allowed that symbol to be really just spit on and stepped on."

During Krzyzewski's first media availability since his 10-day coronavirus quarantine ended Saturday, he gave a blistering response to Wednesday's riot fueled by Trump supporters that led to four deaths and numerous arrests.

The 73-year-old Hall of Fame coach had been sidelined since Dec. 30, after coming into contact with a COVID-19 positive family member. He missed Duke's game Wednesday night against Boston College, which occurred just hours after the riot took place. 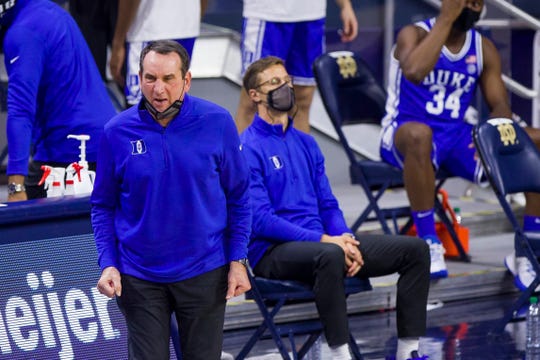 Duke coach Mike Krzyzewski reacts after a turnover during a game against Notre Dame on Dec. 16. (Photo: Robert Franklin, AP)

"If someone's doing something bad, Congress has the responsibility of stepping forward. … Where are our values? Our nation has been built on values. …

"This is not about being a Republican or a Democrat; it's about begin a damn American," he said. "Be an American. You know, work together. Let's get this thing back. People say, that's not who we are — that is who we are right now. We need to change who we are. We need to get back to the basic principles that have founded this country."

The Blue Devils beat Wake Forest 79-68 at Cameron Indoor Stadium in Krzyzewski's first game back. But he has been in close contact with the team via Zoom calls and his players acknowledged it has been an emotional week.

"Our emotions were high," Jeremy Roach, a Washington, D.C., native said on a Zoom call Friday. "Because that’s somewhat close to our state. So emotions were definitely high. But you just have to get through and keep pushing. Like everybody says, keep pushing for change. One day it will come. Believe.”