Ohio State helped usher the Big Ten into the regular season with a 52-17 victory against Nebraska, which hung around for much of the first half but proved unable to slow down quarterback Justin Fields and the Buckeyes offense.

Already one of three teams receiving first-place votes in this week's Amway Coaches Poll, the Buckeyes showed little signs of the sluggishness that has hobbled even the nation's best teams after a unique offseason.

Fields completed 20 of his 21 attempts for 276 yards and had a team-high 54 rushing yards with three combined touchdowns as OSU racked up nearly 500 yards of offense. 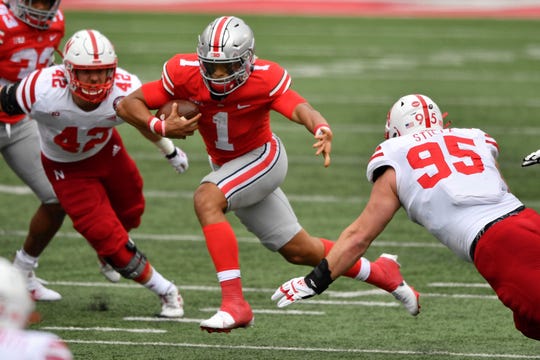 Stressed early by Nebraska's tempo — the Cornhuskers have improved depth and overall talent up front, which bodes well for the offense in Scott Frost's third season — the Buckeyes' performance from late in the second quarter through the final whistle painted the picture of a team capable of running the table and reaching the College Football Playoff.

The Big Ten's second playoff contender lost 36-35 in overtime to Indiana, dealing a crippling blow to the Nittany Lions' postseason hopes. Ahead 28-20 with over a minute left in the fourth quarter, Penn State allowed the Hoosiers to score and convert the two-point conversion to force overtime. Indiana quarterback Brandon Penix Jr. completed the two-point try in the bottom of the extra frame for one of the best wins in program history.

The loss removes much of the luster from next weekend's prime-time matchup with the Buckeyes. It also seems to remove much of the intrigue: Ohio State will be the significant favorite on the road.

Finally, the loss opens up room for Michigan, Minnesota or Wisconsin to stake claim for second place in the conference, which dictates where teams fall in the postseason pecking order. But only second place seems up for debate after one week — Ohio State might be too good to unseat from atop the Big Ten.

Here are the rest of Saturday's winners and losers:

Quietly one of the few remaining unbeaten teams in the Bowl Subdivision heading into the weekend, Oklahoma State bolstered its credibility and took a step toward claiming the top spot in the Big 12 with a 24-21 victory against Iowa State. This could be the Cowboys' year: Oklahoma, Texas and TCU have struggled and Baylor has taken a step back, almost paving a path for OSU to head

It feels like the late 2000s again at Rutgers, which snapped a 21-game Big Ten losing streak in beating Michigan State 38-27 to kick off the Greg Schiano reunion in grand style. After leading Rutgers to the greatest heights in program history before leaving after the 2011 season, Schiano has quickly breathed life back into the perennial conference pushover since being hired in December.

STREAK OVER: Rutgers gets first Big Ten win since 2017 in Greg Schiano's debut

UNC rebounded from last week's ugly loss to Florida State with a 48-21 victory against rival N.C. State. After a strong start, the Wolfpack struggled with turnovers and in getting stops against the Tar Heels' balanced offense: 252 yards passing, 326 yards rushing. Barring another inexplicably bad performance, UNC will beat Virginia, Duke and Wake Forest to have just one loss heading into games against Notre Dame and Miami.

The situation seemed ripe for an upset: Notre Dame had looked listless and underwhelming in last week's win against Louisville while Pittsburgh had lost three games in a row, the first two by a single point. Instead of salvaging their season, the Panthers were blown out by the Fighting Irish, who took a 28-3 halftime lead and cruised to a 45-3 victory. Now 5-0, the Irish take on Georgia Tech on Halloween before a crucial date with Clemson to open November.

Speaking of the top-ranked Tigers, Clemson sleepwalked through a good portion of a 47-21 victory against Syracuse, which pulled within six points in the third quarter, before waking up to pull away and notch a pair of firsts: the first time winning its first six games of the year by 18 or more points and the first time opening a season by scoring 37 or more points in six straight games.

Even had Penix not dove and caught just the barest whisper of the left pylon to secure the 36-35 victory, Indiana would've landed in this category just for having the guts to go for the win instead of safely kicking the extra point to force a second overtime. Is the victory itself that surprising? It really shouldn't be. Indiana has played PSU tough the last few times out, narrowly losing last season, and has turned a corner under Tom Allen, one of the league's more underrated head coaches. Still, Indiana had lost 43 games in a row against opponents in the top 10.

The losing streak against Alabama sits at 5,117 days and counting after the Crimson Tide's 48-17 victory, the latest blowout in a series that was once competitive — seriously, Tennessee used to beat Alabama — but is now an annual reminder of how far the Volunteers lag behind the best teams in the SEC. Alabama quarterback Mac Jones continued to build his Heisman Trophy case with 387 yards passing. In good news, relatively speaking, Tennessee cracked 300 yards of offense against the Tide for the first time since 2015. (The Volunteers gained 302.)

The bad news: Alabama will be without wide receiver Jaylen Waddle for the rest of the season after he broke his ankle on the opening kickoff, Nick Saban said at halftime. Losing Waddle, a projected first-round draft pick, removes the most important piece from Alabama's three-headed receiver corps and weakens the return game. He entered Saturday averaging 139.3 yards per game and 22.2 yards per catch. With Waddle out, the passing game will focus even more heavily on senior DeVonta Smith and sophomore James Metchie III while Alabama searches for a third option.

The Spartans lost to Rutgers. Along the way, coach Mel Tucker's debut included seven turnovers, the program's most in a game since 1981. Maybe this can be interpreted as a good sign: Rutgers' 38 points were the most allowed by a Michigan State coach in his debut since Nick Saban lost 50-10 to Nebraska in 1995.