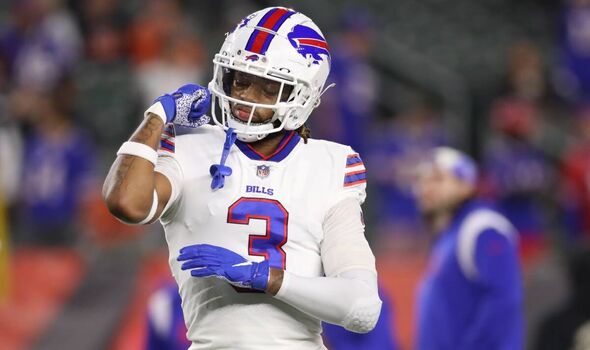 Just a day after Damar Hamlin spoke to his team-mates for the first time since suffering a cardiac arrest, he’s now posted a message to the fans on social media. The Buffalo Bills star has thanked fans for their ‘overwhelming’ love and support, and vows to come back stronger.

The Bills star has been hospitalised since Monday when he suffered a cardiac arrest during the first quarter against Cincinnati Bengals.

The game was postponed and later called a non contest, with the sporting world praying for Hamlin to pull through. Hamlin has been making huge strides on the road to recovery, and shared an emotional video call with team-mates on Friday, where he said: “Love you boys.”

And now he’s broken his public silence with a message, and fans are loving it. The Bills safety posted online: “When you put real love out into the world it comes back to you 3x’s as much.

“The Love has been overwhelming, but I’m thankful for every single person that prayed for me and reached out. We brung the world back together behind this. If you know me you know this only gone make me stronger. On a long road keep praying for me!”

Initially Hamlin was unable to verbally communicate, as he was breathing via the aid of a tube while in critical condition. But the Bills posted a positive update as they confirmed this had been removed, and now Hamlin is back talking again.

The Bills tweeted on Friday morning: “Damar’s breathing tube was removed overnight. He continues to progress remarkably in his recovery.

“His neurologic function remains intact and he has been able to talk to his family and care team.” An immense amount of support for Hamlin has flooded in since the incident that occurred on Monday, that saw the game between the Bills and the Bengals postponed.

Midway through the first half, the 24-year-old collapsed after making a tackle and had to be revived on the field before he was transferred to the University of Cincinnati hospital. The NFL confirmed on Thursday that the game would not be replayed, and that it would be called a no contest as the match has been scrapped.

Despite the game having huge playoff implications ,with both teams still in the race to secure the number one seed and earn a bye through the first-round, the teams and the NFL have collectively decided not to resume. They will now have their post-season positions determined based on their winning percentage for a 16-game season, rather than the 17 games played by all other NFL teams.

Because of this disparity, the league has also recommended changes to this years playoffs, with the AFC championship game – the final meeting of the top two teams in the conference before the Super Bowl – being played on a neutral field.

Hall of Fame class of 2022: Will A-Rod and Ortiz’s ballot debut affect votes for Bonds, Clemens?