As Week 1 of the NFL season kicked off, thousands of players stood together in solidarity in their fight against racism and systemic oppression. Their message – presented on black T-shirts worn as they arrived at stadiums or took the field for pre-game warmups – was clear and impossible to distort.

“An injustice against one of us is an injustice against all of us,” the front of the shirts read, printed over the shadowed statement, “One team,” above the logos of the National Football League and NFL Players Association. The backs of the T-shirts read “End Racism,” in big, block letters.

The shirts were the product of a collaboration from Houston Texans safety Michael Thomas, his apparel company and the NFLPA. The NFL, and Nike, which owns exclusive on-field apparel rights, signed off on the project. 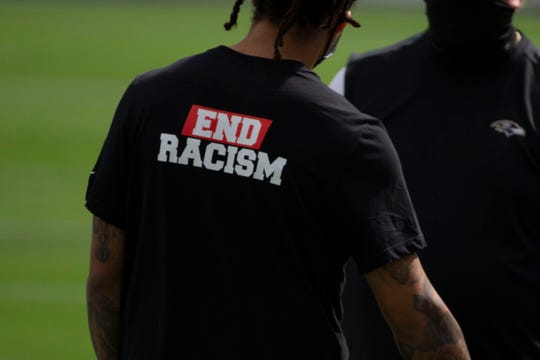 Months of planning and discussions made it all possible. After the response this weekend, Thomas said the mission hit its mark.

“It’s one thing if we all had great messages on a team-by-team basis,” Thomas told USA TODAY Sports. “But, to look up, and on Sunday, to see all of the players from across the league wearing that shirt, it gave me — I don’t even know how to say it. It was surreal. It gave me a feeling that everyone is in this together.

"It’s a brotherhood in the NFL, but everybody was supporting the message. All of us want to end racism. All of us want true justice in this country. … So, for all of us to come together, be on the same page, trying to share the same message on game day, that was huge. Especially for opening weekend.”

The idea was first hatched in late May. Troubled by the killings of George Floyd, Breonna Taylor and Ahmaud Arbery, Thomas and his fellow players tried to come up with ways to use their resources and platforms to draw attention to the need to further the fight against racism and police brutality against people of color.

That’s when Thomas got a call from Dior Ginyard, who works in player engagement for the NFLPA. Thomas had previously been working with the NFLPA to obtain licensing for the apparel company he had started about a year ago in his hometown of Aldine, Texas. Ginyard asked Thomas about designing shirts for NFL players to wear as a sign of unity once the season kicked off. Thomas – a nine-year veteran who signed with the Texans this offseason and also serves as a member of the NFLPA’s executive committee – went to work. He consulted with his business associates and new teammate Kenny Stills, an outspoken player-activist who had kneeled during the national anthem alongside Thomas in 2016, when the two played together on the Miami Dolphins.

Thomas and Stills went back and forth about the T-shirt messaging.

Originally, they considered shirts that would read, “Am I next?” But Thomas, Ginyard, and Vogue Wilborn, one of the NFLPA's designers, wondered if the message was "too aggressive."

“A white guy might not feel comfortable wearing that, because obviously, 'Am I next?' didn't really apply,” Thomas said.

Eventually, the team settled on the “End Racism” message.

“It was very clear,” Thomas said. “There was no reading between the lines and trying to figure out what message we were trying to put out. No. It reads very clear. ‘An injustice against one of us is an injustice against all of us. End racism.’ There was nothing people could try to take and use to their own narrative, and it kept us true to the movement and it spoke directly to what we were trying to do. It was very intentional.”

In advance of Sunday’s opener, 3,500 T-shirts were distributed to NFL players. Thomas and the NFLPA sent another 2,000 shirts to fellow athletes in the NBA, WNBA and MLB players' unions.

“I love the fact that all the players actually liked the shirts and wore them,” Thomas said. “It also was well received by fans. You know, the ones who are going to comment or anything, as you saw in Kansas City when they booed us just for locking arms, there’s going to be that crowd anyway. But for anybody else who’s following the movement and understanding what we were trying to do, they found it unifying.

“Obviously, wearing T-shirts isn’t enough,” added Thomas, who has joined other players in continuing to lobby lawmakers for police reform while also heavily investing time and resources in voters' rights initiatives and education. “Wearing T-shirts, that’s not the objective. But, it does allow us to be visible and it was clear that, yes, we have to go back to work, and yes, we have a job to do. But we understand what’s going on in our country – Black, white, Hispanic – we all understand that color doesn’t matter. We all see it and we’re all trying to fight for the whole thing.”

With Week 1 in the books, here's a lookahead to a key issue throughout the league, as well as three players who need to bounce back:

NFL teams are having to rely on flexibility, resourcefulness, ingenuity and pre-existing relationships as they try to tackle the challenge of scouting for college talent during this coronavirus-altered season.

College football hasn’t yet returned in full force. However, pro teams are doing their best to keep tabs on the programs that have begun playing, and they’re having to do so in a different fashion than usual.

To limit the risk of exposure to coronavirus, teams are restricting their scouts to attending only games within driving distance rather than allowing them to fly to games, two NFL scouting directors told USA TODAY Sports, speaking on condition of anonymity because they were not authorized to disclose plans. Teams are leaving the distance of travel up to the discretion of the scouts.

The restrictions also eliminate face-to-face informational meetings with college coaches. Instead, scouts are relying on Zoom meetings with school contacts and phone calls with other sources connected to programs to gather background information on prospects.

More than ever, scouts will rely on relationships formed in previous years to provide the same thorough information.

Three in need of a rebound

The regular season kicked off on a dismal note for a number of key players around the league. The challenges only intensify in Week 2 for many. Here’s a look at a few stars desperate for a rebound this week:

Carson Wentz —The Philadelphia Eagles quarterback threw two interceptions as his team blew a 17-0 lead and lost 27-17 to Washington. Yes, he was sacked eight times while playing behind an injury-riddled offensive line. But Wentz also held onto the ball too long, and he forced things when he didn’t have to. The Eagles should contend with the Dallas Cowboys for the division this season, but an 0-2 start (which is possible given Philly hosts Aaron Donald and a formidable Los Angeles Rams defensive front on Sunday) will put them in an early hole. Wentz has to be better.

Rob Gronkowski — Two catches for 11 yards in his Tampa Bay Buccaneers debut? Not very Gronk-like. Tom Brady’s favorite tight end still is knocking off the rust. Understandable. But Brady needs him, as the quarterback lacks comfort with his other targets.

Saquon Barkley — Some view Barkley as the best back in the league. But he didn’t look like it in the New York Giants' Monday night loss to the Pittsburgh Steelers, managing just six rushing yards and no touchdowns on 15 carries. Barkley did have six caches for 60 yards. But the Giants need more from their bell cow, especially as they aim to ease pressure on young quarterback Daniel Jones. Barkley this week face a Chicago Bears defense that gave up 138 rushing yards in Week 1.

Cam Newton excited to make Patriots debut: ‘I don’t get butterflies, I give ’em’