FLORHAM PARK, N.J. — The New York Jets have the longest playoff drought in the NFL and are coming off one of their worst seasons in franchise history.

For owner Woody Johnson, who returned to the team earlier this year after serving as the U.S. Ambassador to the United Kingdom, a lot has changed in his four years away. But with the offseason program wrapping up this week, Johnson says he's confident things are finally headed in the right direction.

"I feel it here with this team, I feel something that could be special," Johnson said Wednesday, speaking to reporters who regularly cover the team for the first time in four years. "But it's too early."

Johnson has felt the positive vibes surrounding the Jets this spring, but he's right. We have no idea if this team is ready to start turning things around. 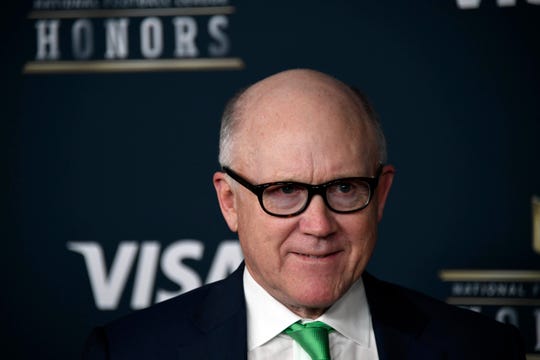 Yes, there's a different feel around the facility with new coach Robert Saleh joining GM Joe Douglas at the top of the football operation. And there's a lot of excitement about No. 2 pick Zach Wilson, who the Jets believe can be their franchise quarterback of the future.

But the Jets are still in rebuilding mode, and fans are tired of losing after watching the team go 2-14 last year to miss the playoffs for the 10th straight season, one short of the longest drought in franchise history.

Even Johnson doesn't know how quickly the Jets can turn it around. And while Johnson said Douglas and Saleh will have a "lot of leeway" to figure things out, he understands there's a sense of urgency.

"I don't think patience is the word I would use," Johnson said. "We'll do everything in our power to put a winning team on the field, this year, [every] game. And getting the right team in place, which I think we've done a great job of so far. We'll see.

"You see some good things here, but we're still [practicing] in shorts," Johnson said. "I think the mindset, and the mindset with the coach … if that comes together, which I think it will, good things are going to happen — quicker, than not quicker. I really see a tremendous vibe in the building and on the field and in the classrooms that gives me a lot of hope."

Johnson praised his younger brother, Christopher Johnson, who was the team's acting CEO during his time away, for his stewardship of the team that included the hiring of the new coach and GM. Christopher will continue to have a major role, according to Woody, but he did not provide details.

Johnson was also asked about a State Department report issued last year that included allegations he made racist and sexist remarks while serving as Ambassador.

"All of those allegations were looked at at the highest levels of the State Department … and concluded that none of it was substantiated — none of it," Johnson said. "There's a letter to that effect, and I've got documents, which is what I suspected. My wife was absolutely furious when she saw this, because this goes against my history and everything I've done for my entire life. It was something that really was very hard on me to listen to all that stuff. But that's done. That's concluded."

Johnson was also asked if he regretted working for a president who falsely claimed that the most recent presidential election was stolen.

"If we could stick to football questions, that would be great," he said.

Did Matt Patricia light up Matthew Stafford from a (laughably obvious) burner account?