To paraphrase a well-worn line: We are ready for some football. And with the official kickoff of the 2022-23 season of National Football League just a day away – football fans have good reason to expect a wild ride.

I can predict some shocking surprises this season – including one of football’s greatest players falling back to Earth (for good), a few struggling stars finally realizing their potentials and arguably the most tortured franchise in the history of the game going to the Super Bowl and winning it all. 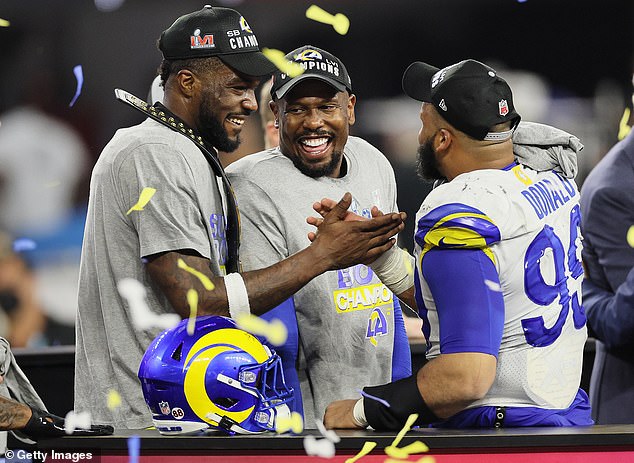 The start of the football season is almost here – but who will go on to win the Super Bowl?

Tom Brady, the 45-year-old quarterback of the Tampa Bay Buccaneers, is entering his 23rd season. He has appeared in 10 Super Bowls and won seven, including two years ago after he joined the Bucs following 20 seasons with the Patriots.

People have been predicting his decline for years only to see him continue to perform at heights of the profession that only the greatest of the greats can reach. And yet… there is reason to believe this year will be different.

It may be the GOAT’s last go. For one, Brady’s supporting cast is weaker.

The interior of the Bucs’ offensive line has been completely remodeled because of losses to free agency, retirement, and injury.

The most devastating change is at center, where Pro Bowler Ryan Jensen is out indefinitely after tearing an ACL in July. His absence cannot be overstated because he’s responsible for making the adjustment calls for the entire line, but also keeping defenders from pressuring Brady up the middle, where he is most vulnerable. 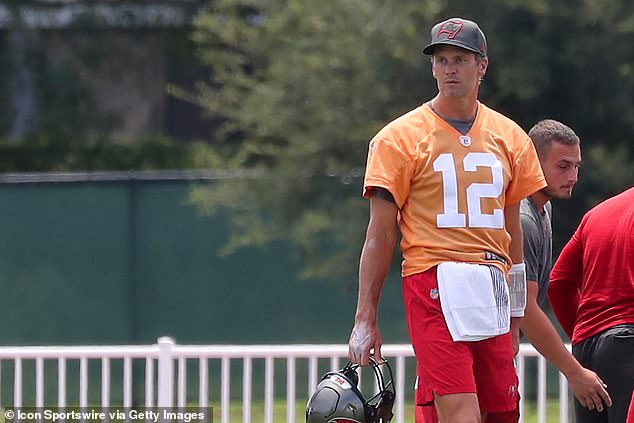 The Bucs are hopeful Jenson will return late in the season, but there is no guarantee he will be at full strength even if he does.

Further complicating matters is the departure of tight end Rob Gronkowski, who retired after last season.

Strong, quick and aggressive, Gronkowski is a matchup problem for Bucs’ opponents in the passing game and a dominating physical blocker in the ground attack.

He also is trusted unconditionally by Brady, dating back to their years together in New England.

When Brady goes under center this season, there’s going to be a gapping hole where Gronk once stood and Brady will feel it. 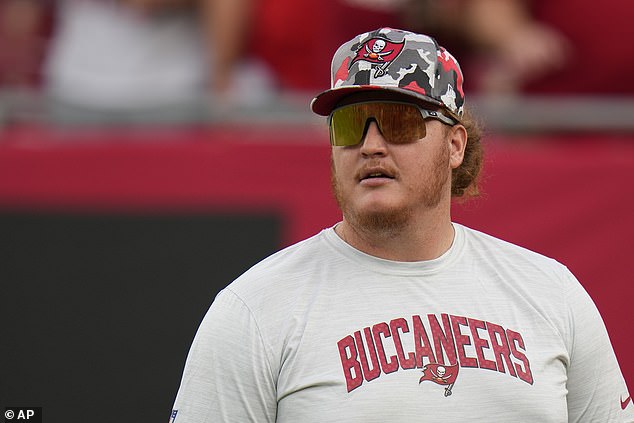 Lastly, there is Brady himself.

An adage within the athletic community is if a player is talking about retirement, he’s already retired. By that measure, Brady should be in a rocking chair on a porch sipping iced tea.

He announced he was leaving the game early in the offseason then changed his mind 40 days later. Then there is the emotional vulnerability he has displayed in recent press conferences.

‘It’s all personal,’ he said in response to questions about his unexplained, yet-excused 11-day absence in the middle of training camp.

‘Everyone’s got different situations they’re dealing with. We all have really unique challenges to our life. I’m 45 years old, man. There’s a lot of s*** going on.’

All this raises the question of whether his competitive fire will continue to burn as brightly. And alas, as Brady struggles so will the team – I expect the squad to fail to make the playoffs. 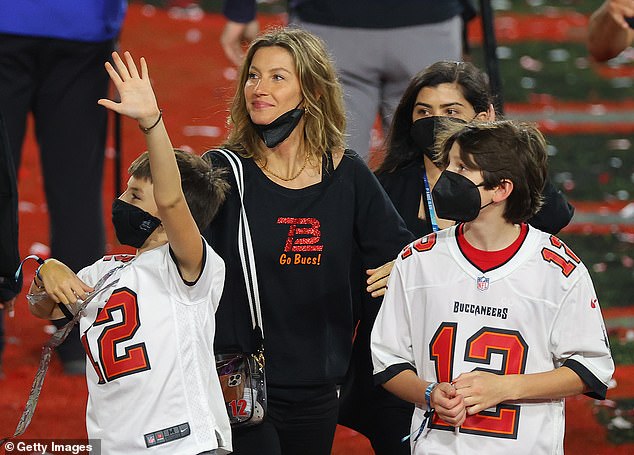 Gisele Bundchen, wife of Tom Brady #12 of the Tampa Bay Buccaneers, celebrates with Benjamin Brady and John Moynahan after the Buccaneers defeated the Kansas City Chiefs 31-9 in Super Bowl LV at Raymond James Stadium on February 07, 2021 in Tampa

As our old heroes go from Raymond James Stadium to The Villages, young stars will find their time to shine.

He was labeled a ‘generational talent’ last year after being drafted No. 1 overall by the Jaguars.

Unfortunately for Lawrence, he stepped into a dysfunctional situation that resulted in substantial growing pains.

Lawrence completed only 59.6 percent of his passes and threw for only 3,641 yards and 12 touchdowns, with 17 interceptions. 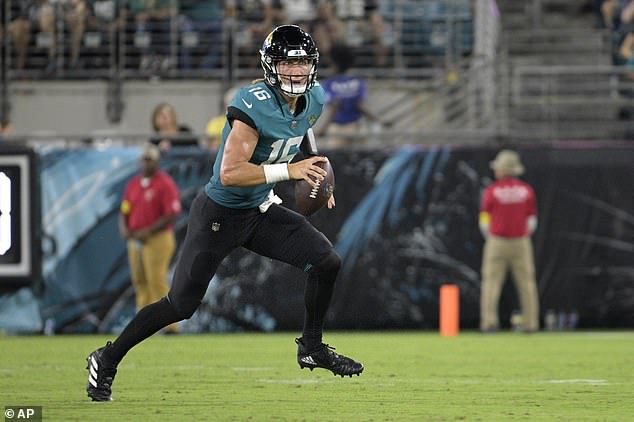 For comparison, the Cincinnati Bengals’ Joe Burrows threw 13 touchdowns despite appearing in seven fewer games during his rookie season. The positive is that Jaguars’ ownership realized its mistake and fired Urban Meyer, the former Ohio State coach who created many of the problems by alienating seemingly everyone in the building.

Maybe the most publicly disruptive example of Meyer’s chaotic tenure was video that emerged showing a seriously intoxicated Meyer dirty dancing in a bar with a young woman, who most certainly was not his wife.

Meyer was replaced him with Doug Pederson, a positive and upbeat NFL veteran who coached the Eagles to the franchise’s only Super Bowl win five years ago.

Pederson played quarterback in the league and is widely respected for his ability to not only connect with players, but put them in positions to be successful.

Look no further than Philadelphia, where he helped Carson Wentz put together an MVP-type season that Wentz has yet to duplicate. 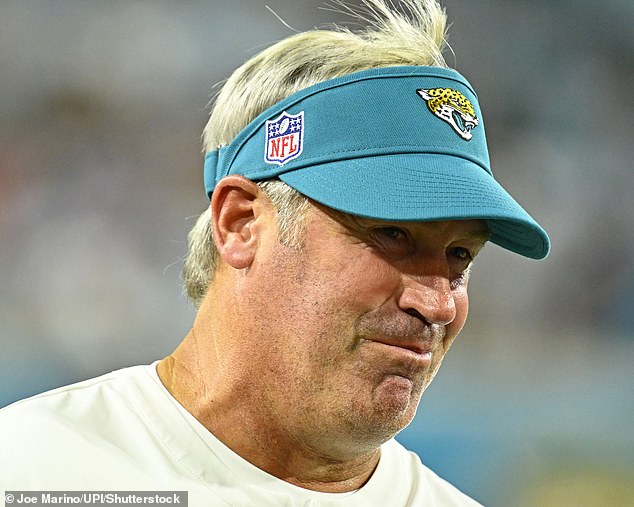 Jacksonville also spent lavishly in free agency to upgrade the offense, signing wide receivers Christian Kirk and Zay Jones, tight end Evan Engram, and five-time Pro Bowl offensive lineman Brandon Scherff; and it will get back versatile running back Travis Etienne, a first-round pick last year who sat out the season because of a foot injury.

Beyond that, the Jaguars will reduce the load on Lawrence’s shoulders by playing better defense.

They used the No. 1 overall pick this year on defensive lineman Travon Walker, who has the ability to rush the passer from the edge and interior and added linemen Arden Key and Folorunso Fatukasi in free agency.

They also upgraded their secondary with the signing of cornerback Darious Williams, who won a championship last season with the Rams.

It might be a stretch to say Lawrence will flourish in his first season under Pederson, but it is more than plausible that he will be significantly better than he was a year ago.

It’s hard to call Jefferson a surprise considering he was among the league’s most productive receivers in his first two seasons, but look for the former LSU star to truly flourish under the new offensive system being installed by coach Kevin O’Connell and coordinator Wes Phillips.

Both coaches were on last season’s Rams staff and have been heavily influenced by Los Angeles coach Sean McVay, whose play-calling contributed to Cooper Kupp becoming the first player since 2005 to win the triple crown for receivers: most receiving yards, most receptions, and most receiving touchdowns. 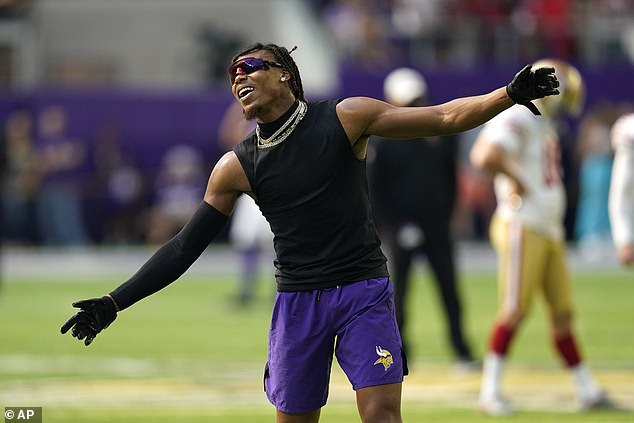 Jefferson has the ability to match that feat this season.

The biggest thing going for Winston is that the New Orleans’ roster is loaded.

The defense is among the best in the league, and the offense has talented receivers and runners and a solid line.

The only reason many people aren’t picking them to make a deep playoff run are doubts about Winston, who still has to prove he can protect the football.

He was on his way to doing so last season with just three interceptions (against 14 touchdown passes) through seven games, but tore an ACL missing the final 11 games. 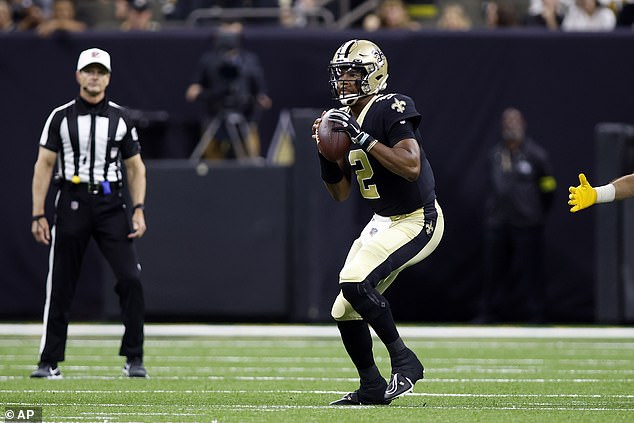 Consequently, some still think of him in terms of his final season with Tampa Bay in 2019, when he threw a league-leading 30 interceptions.

But Winston is determined to show he can tame his turnovers while still pushing the ball downfield.

He has a wealth of weapons on the outside with the return of All-Pro wideout Michael Thomas (he missed last season because of injury) and the additions of possession receiver Jarvis Landry (free agency) and speed threat Chris Olave (draft, round one).

Another story to keep an eye on – but only through the fingers of hands pressed firmly over one’s face – are New York’s two dysfunctional football franchises.

Despite some positive offseason moves – the Jets will fizzle.

Gang Green looked to be headed in a positive direction after spending heavily in free agency to acquire guard Laken Tomlinson, tight ends C.J. Uzomah and Tyler Conklin, cornerback D.J. Reed, safety Jordan Whitehead, and defensive tackle Solomon Thomas; then following that with a terrific draft (on paper) which brought in cornerback Ahmad Gardener, wide receiver Garrett Wilson and edge rusher Jermaine Johnson in the first round, and Breece Hall – arguably the draft’s top running back – in the second round. 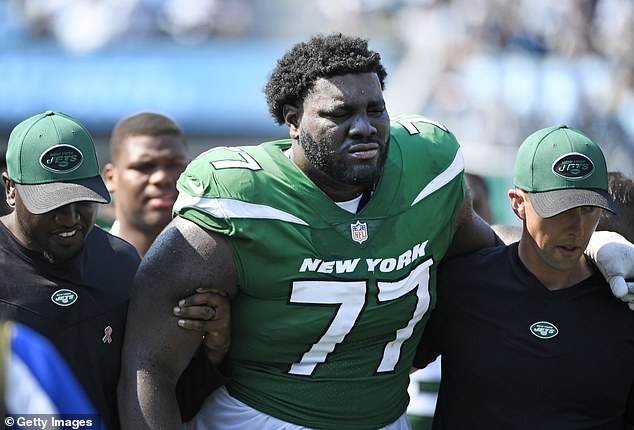 But almost as quickly as one could say ‘playoffs,’ second-year left tackle Mekhi Becton sustained a season-ending ACL injury, and quarterback Zach Wilson, coming off a disappointing rookie season after being selected No. 2 overall, hurt his knee while sliding in a preseason game and is likely to miss the opener.

The New York Giants have not had any major setbacks under new coach Brian Daboll, but there remain significant questions about whether former first-round pick Daniel Jones is the answer at quarterback.

Don’t just take my word for it – The G-Men clearly have their own doubts after not picking up the fifth-year option on his contract.

One potential bright spot for the Giants is running back Saquon Barkley. 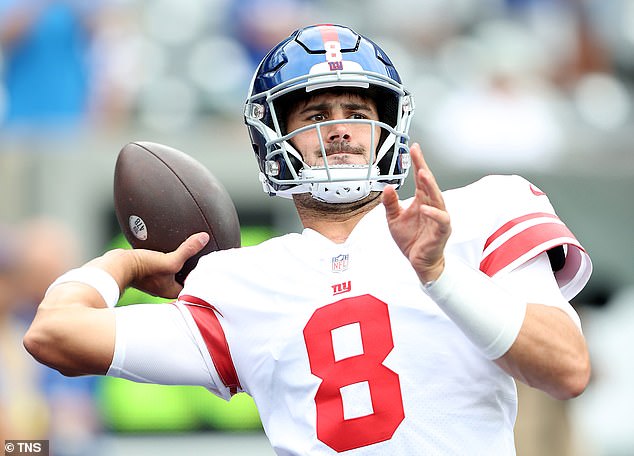 Then he had a decent second season and has been a shell of his former self since tearing an ACL in Week for the 2020 season, appearing in just 15 games and earning just 950 yards combined from scrimmage.

Many have questioned not only if he will ever regain his Offensive Rookie of the Year form, but his running style, contending it is more finesse than physical.

Barkley clapped back at his critics during training camp, but words alone will not win them over. It will take action, and he’s determined to show he can still be one of game’s top backs.

Bottom line: The Giants will go only as far as quarterback Daniel Jones takes them.

He has been inconsistent, at best, to this point in his career. If that doesn’t change, he will be playing elsewhere next season. If it does change, the Giants will get closer to .500 than the franchise with whom they share the local market.

A BAD YEAR TO BE A FOLDING TABLE

The Buffalo Bills are the consensus favorite to win Super Bowl LV11 winner – so I’m not exactly going out on a limb here. But allow me to explain my thinking: If there is a direct correlation between the quarterback position and team success, it can be found in the Super Bowl., where 17 of the past 19 winners have been led by quarterbacks who are either in the Hall of Fame or likely headed there.

The Bills signal-caller has established himself as one of the game’s brightest young stars. There is seemingly nothing he can’t do. 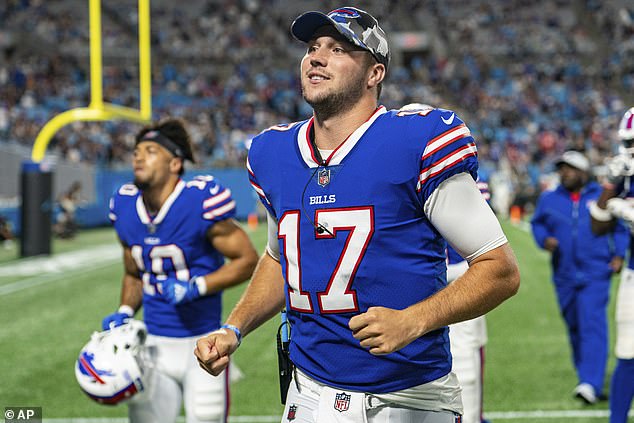 Run? He has gained 2,325 yards with 31 touchdowns during that same period.

He has taken the Bills to the playoffs each of the last three seasons after the franchise advanced only once in the preceding 18 years.

And the former Wyoming star has become a face of the league, and with a stacked roster that was strengthened by the addition of edge rusher Von Miller. 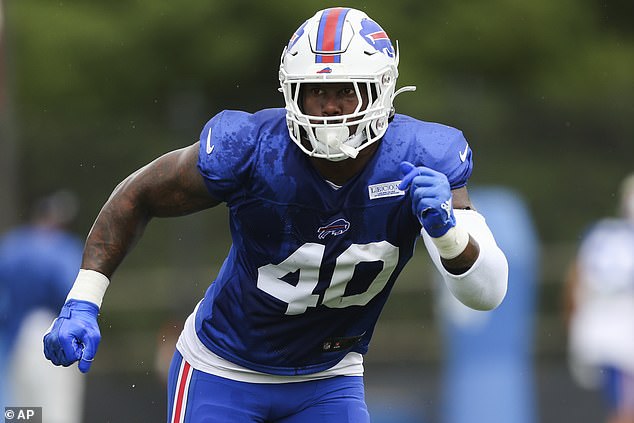 My belief is that they will take on and defeat the Philadelphia Eagles in the championship game, with the edge being the quarterback position.

Philadelphia is led by Jalen Hurts, who is an emerging talent but not yet on the level of Allen.

There’s a saying that big-time players make big-time plays in big-time games. At the moment that is the very definition of Allen.

So, let the games begin.