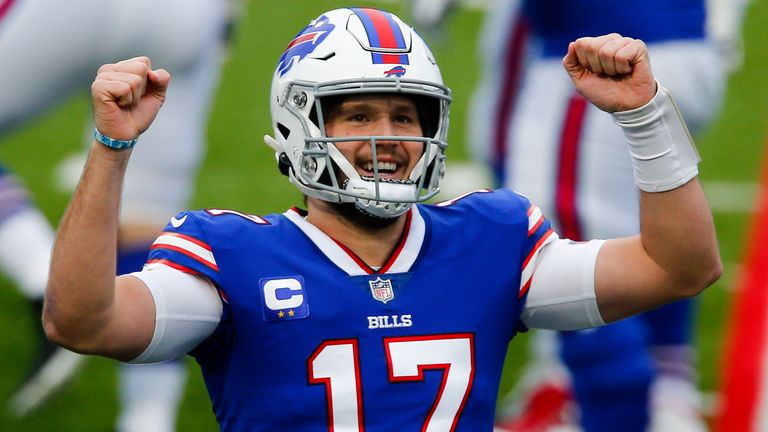 Josh Allen and the Buffalo Bills have reached an agreement over a new six-year contract extension locking him down through the 2028 season.

NFL Network’s Ian Rapoport and ESPN’s Adam Schefter report that the deal is worth $258m and includes NFL-highs of $150m in total guarantees and $100m fully guaranteed upon signing.

The $43m average annual value makes him the second-highest-paid quarterback in the league behind the Kansas City Chiefs’ Patrick Mahomes, putting him just ahead of the Dallas Cowboys’ Dak Prescott.

Allen led the Bills to the AFC Championship Game last season and finished runner-up to Aaron Rodgers in the race for league MVP after recording 396 passes for 4,544 yards and 37 touchdown passes with a completion percentage of 69.2, all of which marked single-season franchise records.

On top of that he also rushed for 421 yards and eight touchdowns as he was selected to the Pro Bowl for the first time in his NFL career.

It continued his emphatic response to an interception-ridden rookie campaign in 2018, Allen’s marriage with offensive coordinator Brian Daboll proving defining in his breakout season.

Allen, the No.7 overall pick out of Wyoming in 2018, had already been under contract through the 2022 campaign on the back of the Bills exercising his fifth year option in May.

“When it happens, it happens,” Allen said in April, speaking to NFL Network’s Kyle Brandt. “They will iron out the details and if we can get to something soon, I’d obviously love to be locked down in Buffalo for a very long time. It’s a place that I call home, I love being there.”

His new deal will undoubtedly peak the interest of Baltimore Ravens quarterback Lamar Jackson and Cleveland Browns play-caller Baker Mayfield, both of whom are in line for new deals.

Isaiah Simmons, AJ Dillon, Darnell Mooney: Which NFL players could break out in 2021?