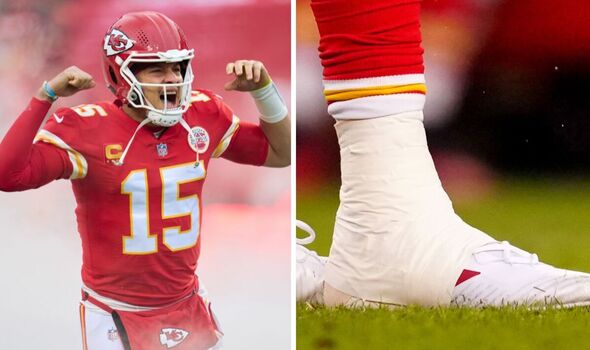 NFL superstar Patrick Mahomes has been diagnosed with a high ankle sprain but expects to play in the AFC Championship Game next weekend. The Kansas City Chiefs quarterback went down early but still led his team to a win over the Jacksonville Jaguars in the NFL playoffs on Saturday night.

Chiefs fans watching around the world collectively held their breath as Mahomes was forced off at the end of the first quarter as he landed awkwardly on his right ankle following a sack. He went to the locker room before returning to the pitch for the second half.

Mahomes managed to conjure up enough magic to lead the Chiefs to their fifth successive AFC Championship Game as he threw for two touchdowns and 195 yards despite missing an entire quarter. He was heavily restricted by the ankle issue but still managed to secure a 27-20 win over the Jaguars at Arrowhead Stadium.

Mahomes – the favourite to win the 2022 MVP award – still finished the game and told reporters he’ll be ‘good to go’ for the game next week. Initial scans came back negative, which was promising news immediately after the game while an MRI scan was booked for Sunday.

The MRI confirmed Mahomes suffered a high ankle sprain – a significant injury, but that is believed to be the extent of the damage. As a result, the 27-year-old plans to take part in the clash next week to determine who will represent the AFC in Super Bowl LVII.

Mahomes returned to the field with a limp as he struggled to put weight on his right leg, although his quality remained impervious to the pain. He threw another touchdown to lead the Chiefs to the win over Trevor Lawrence’s Jaguars.

The Chiefs will be desperate to have Mahomes out on the field next Sunday and he downplayed the severity of the injury after the match as he said: “It’s going to take a lot to keep me out of a football game. I’ll be good to go.”

With Mahomes injured, backup quarterback Chad Henne – who is expected to retire at the end of the season – threw his first career touchdown pass in the playoffs when he found Travis Kelce.  The 37-year-old, who entered the NFL back in 2008, put in a solid performance to ensure the Chiefs didn’t miss their superstar quarterback.

The Chiefs will now face either the Buffalo Bills or the Cincinnati Bengals in the AFC Championship Game while Mahomes have eight days to try and return to full fitness. His presence could be the difference between a third Super Bowl appearance in four years or an agonising postseason exit.

Raiders hold pregame huddle on top of Chiefs’ logo, immediately get scored on

Falcons WR Calvin Ridley: 'I should be elite this year'