LOUISVILLE, Ky. — Duke missed three chances to tie or take the lead in the final minute against Louisville, dropping its third straight game during a 70-65 loss to the Cardinals on Saturday at the KFC Yum! Center.

"I'm disappointed for these kids," coach Mike Krzyzewski said. "They are a good group, and it's been a really tough year for a whole bunch of reasons. Their attitudes are so good and they work so hard in preparation and during the game. You'd like to see them rewarded."

Trailing 66-65 with 33 seconds left, Joey Bake's three-point attempt  bounced in and out of the basket. Louisville's Carlik Jones, who scored a team-high 24 points, hit two free throws on the next possession to stretch the lead to 68-65.

Duke had a chance to tie the game with under 20 seconds remaining, but open three-point looks from Wendell Moore and DJ Steward fell short. 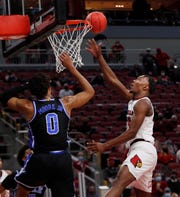 Sophomore Matthew Hurt scored 24 points on 9-of-13 shooting for Duke while grabbing eight rebounds before fouling out with 1:50 to play.

It was his fifth game with 20 points or more, but not enough to avoid another loss.

"We put ourselves in a position to win, that's all we can ask for," Hurt said.

Louisville had four players score in double digits with Jae'Lyn Withers adding 13 points, David Johnson 12 and Dre Davis 11. The Cardinals led 36-33 at halftime and held their biggest lead at 50-44 with 13:32 left in the second half.

Duke freshman Jalen Johnson, who had 24 points and 16 rebounds in Tuesday's loss to Pitt, was limited to nine points and missed substantial time in the second half due to turnover issues.

Johnson was responsible for six of Duke's 15 turnovers.

David Thompson is an award-winning reporter for the USA Today Network covering NC State and Duke athletics. He can be reached at [email protected], at 828-231-1747, or on Twitter at @daveth89.

‘You can blame me’: Rockies have no answers after trading star Nolan Arenado to Cardinals