With any hopes of contesting games – with or without fans – still weeks away, Major League Baseball is granting its 30 franchises autonomy to determine ticket policies for games already postponed by the COVID-19 pandemic, a move that could potentially enable ticketholders to receive refunds for unplayed games.

An industry official with direct knowledge of MLB's plans said Tuesday the league has determined enough time has passed that teams should be given the option to provide relief for fans who may themselves be financially stretched by the economic devastation wrought by the coronavirus. The official spoke to USA TODAY Sports on condition of anonymity because the plan had not yet been announced.

At the moment, the official said, MLB does not plan on outright cancelling games, given that so much remains unknown about the arc of the pandemic, and the league has multiple contingency plans to make games up should conditions allow.

Yet as of Tuesday, a typical team has already had about 15 games postponed, or nearly 20% of an 81-game schedule. By the end of May – a timeframe now unrealistic for games to begin – about 30 games, or more than a third of a team's home schedule, will be lost. 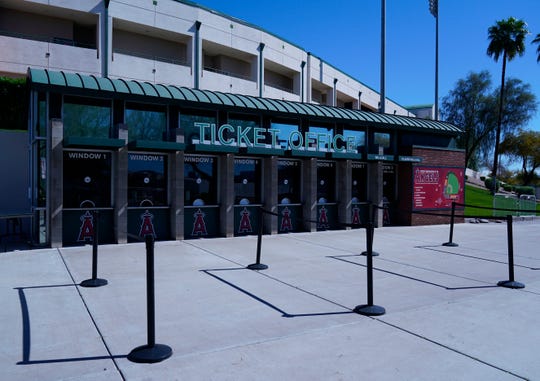 Until now, the league told teams to treat the lost games as postponements, such as a rainout, for which tickets could be retained for a makeup date or another game. It is opting against a leaguewide refund policy because of the significant variance in ticket policies among individual franchises.

Should teams grant fans the chance to refund their tickets, MLB will become the first major North American sports league to give back ticket revenue due to coronavirus-related postponements. The NBA and NHL each had less than 10 home dates per team when their seasons were suspended in March.

As weeks went on and economic uncertainty heightened, consumers grew increasingly impatient with teams – some NBA and NHL franchises continued invoicing for 2020-21 season tickets, even – and a group of baseball fans filed a class-action lawsuit against MLB.

The significant likelihood that MLB will not stage a 162-game season will mark the first time in 25 years a full season will not be contested.

In that span, MLB has navigated around 2001's 9/11 terrorist attacks, devastating hurricanes that forced games to neutral sites and dozens of other unforeseen events to make up almost every postponed game and stage a 162-game championship season. Yet COVID-19, which has now killed more than 55,000 in the U.S. and 200,000 worldwide, proved impossible to outmaneuver.

MLB's maneuver comes nearly seven weeks after its March 12 decision to cancel remaining spring training games and postpone the start of the season by at least two weeks. Since then, the league has been in a crisis-management and contingency mode, conceiving alternate plans to stage its season in singular or limited markets, such as its many spring-training facilities in Arizona or Florida, while keeping players and staff sequestered. Both MLB and the MLB Players' Association expressed willingness to extend the regular season well into October and stage the playoffs deep into November, likely at neutral sites.

But with more than 40 states still under stay-at-home orders as May approaches, and with players requiring at least three weeks to gear back into game shape, the likelihood of a full season dissipated.

This would be baseball's first truncated season since 1995, when it played a 144-game schedule after the 1994-95 labor-related work stoppage.