Los Angeles: The NFL is gearing up for a normal season and play-offs, with two additional wildcard teams in the Super Bowl chase.

NFL team owners voted Tuesday to expand the play-offs by one team in each conference for a total of 14 next season as they continue to plan for the 2020 season to begin on time. 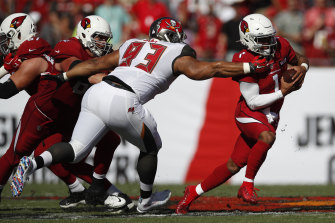 The NFL is planning on its 2020 season starting as scheduled in September.Credit:AP

A number of major sports events around the world, including the July 24-August 9 Tokyo Olympics, have either been postponed or cancelled in recent weeks because of the rapid spread of the coronavirus.

The NFL, America's richest and most watched sport, remains the only major North American professional sports league that has managed to avoid suspending the playing of games because of the coronavirus given its traditional late summer start date.

The league, however, has closed team facilities for the time being, cancelled its annual owners' meeting scheduled for this week in Florida and made major changes to the April 23-25 NFL draft in Las Vegas.

When asked about any contingency plans for the 2020 season Pash said the league, which plans to release full details of the schedule around May 9, remains "pretty confident" the campaign will go on as scheduled.

"All of our discussions, all of our focus has been on a normal, traditional season starting on time, playing in front of fans in our regular stadiums and going through the full 16-game regular season and full set of play-offs," said Pash.

The NFL's 2020 season features four games in London and one in Mexico City, all of which Pash said the league expected will be contested as scheduled unless health authorities tell them differently.

As for the play-offs expansion, only the teams with the best record in the AFC and NFC will get a bye under the new format; the top two teams in each conference skipped wildcard weekend in the past. The seventh seed will play No.2, the sixth will visit No.3 and the fifth will be at the fourth seed for wildcard games.