Nick Saban entered Saturday night's game at Vaught-Hemingway Stadium in Oxford, Mississippi, with a 20-0 record against coaches who used to be one of his assistants.

As the score indicates, things were hardly easy for the Crimson Tide.

Kiffin, the former Alabama offensive coordinator, had the Ole Miss offense humming, gashing Alabama for 647 yards. It was the most yards the Crimson Tide had ever ceded, and the most points they'd ever given up in a victory.

Luckily for Saban, the Ole Miss defense had even less answers.

The Crimson Tide actually out-gained the Rebels, piling up 723 yards. That total was the second-most in Alabama history, behind only a 1973 contest. The combined total yards  – 1,370 – was a new record for an SEC game.

Alabama was balanced, too, as Mac Jones had 417 passing yards and two touchdowns while the run game churned out 306 yards and seven TDs.

Najee Harris churned out the bulk of those yards, carrying 23 times for 206 yards and five touchdowns, which tied a school record. 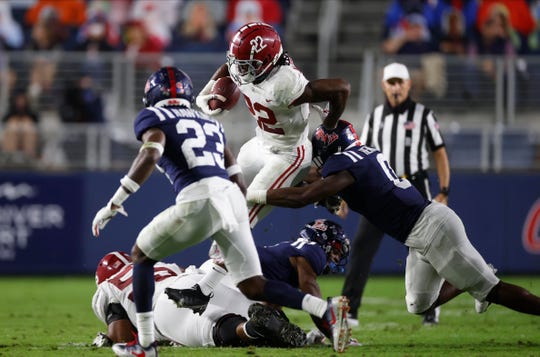 It was score-for-score almost the entire night, with the score tied six times.

Ole Miss set the tone early, needing just 54 seconds to score a touchdown on a four-play, 75-yard drive. Alabama took 10 plays and 4:37 to respond with a TD of its own, to get the shootout off and running.

After forcing a punt, Alabama marched down the field again, but a fumble by Harris – incredibly, the first of his career – at the 1-yard line kept the score even at 7. Ole Miss would turn that momentum into another touchdown.

After a pair of punts, Alabama scored a TD, then the two teams traded touchdowns again to head into the half tied at 21.

There was somehow even less defense in the second half – there was not a single punt in the final 30 minutes.

Leading 49-42, Alabama finally forced Ole Miss to settle for a field goal. The Tide then staged a 90-yard drive to go up 11 and, more or less, seal the game.

While Saban is almost certainly happy to beat Kiffin given the latter's somewhat contentious exit from Alabama and comments he's made in the media since, his former offensive coordinator exposed plenty of things for the Tide to work on.

And they have no time to waste, as No. 3 Georgia comes to Tuscaloosa next week.