Minnesota football coach P.J. Fleck and members of the university's athletics department began laying out potential road maps last month for how to manage the seemingly inevitable spread of the coronavirus, with "plans for the plans," Fleck said, for predicting how COVID-19 would wreak havoc on college football's offseason. One question dominated the conversations: How can we prepare for this?

Hard to project in February, the length and width of the pandemic has engulfed everyday life and shuttered day-to-day operations at programs in the Bowl Subdivision. Practices during the spring have been canceled. The traditional offseason checklist has been decimated. Coaches across the FBS are now beginning to picture an abbreviated regular season, should students not return to campus until deep into July, or the possibility that the upcoming season is postponed indefinitely.

"Everybody talks about getting back to this new normal," Fleck said. "Well, I don’t know if the normal will ever be the same."

An upended offseason has forced coaches and athletes to improvise. Face-to-face meetings are out; FaceTime is in. Squat racks have been replaced by weighted backpacks. The lack of in-person contact has turned individual recruiting into the equivalent of a long-distance relationship. Across the board, programs are combining technological know-how with low-tech workout regimens to replicate the normal routine of spring football and remain as prepared as possible during the sport’s absence.

"I will admit that this is something we didn’t have a plan for," said Penn State coach James Franklin. "It’s been a scramble. It really has."

Meetings have gone virtual with the help of tools such as Zoom and Microsoft Teams. Entire rosters of players, coaches and staffers will meet once a week; Penn State's last meeting featured 157 people, Franklin said. Staff-only meetings at USC have included 42 people. 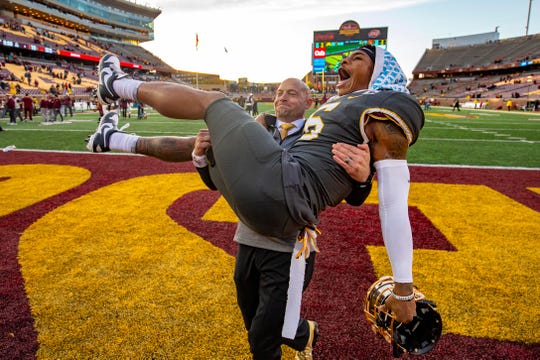 Those larger meetings can set the week's agenda. Smaller meetings, whether delineated by offense and defense or based on a specific position, take on a deeper purpose for new coaching staffs or first-year coordinators, who must find a way in this setting to field and answer questions as teams access playbooks online via password-protected websites.

"I knew being a head coach there were going to be some new challenges you would not face as an assistant coach," said first-year South Florida coach Jeff Scott. "But this is not one I predicted or could see coming."

As more universities closed down athletic activities this month, coaches and support staffers scrambled through online retailers and local stores looking for the equipment needed to repackage entire football facilities into home offices — for webcams and extra monitors, for example. Coaches have adopted a more sedentary lifestyle, spending nine hours every day in front of the computer, Franklin estimated.

Even before closing down campus, USC equipped football coaches with laptops connected to the university server, allowing the staff to scout the Trojans' first three opponents of the regular season.

"It’s allowed us through technology, thank goodness, to continue to work from home in evaluation, self-scout, scouting our opponents as well as doing some professional development studying other teams," said USC coach Clay Helton.

Recruiting has taken a similar detour from the normal routine. March and April are typically key months for on-campus visits, particularly during the scrimmages that cap spring drills. In lieu of that contact, programs are taking prospects on virtual tours of stadiums, facilities, weight rooms and more — giving an approximation of a real official visit through the screen of a phone or computer.

"It’s as good as we can provide right now for kind of a virtual tour in substitution for the usual on-campus visits you get this time of year," said Washington State coach Nick Rolovich.

If anything, given the time coaches and recruits are spending online, recruiting has taken on an even more frenzied pace. There is no limit on virtual contact and, with freer daily schedules, ample time to connect. Minnesota coaches are speaking with recruits over FaceTime "more than ever before," Fleck said. And recruits have been receptive despite the nontraditional contact: FBS teams have collected 50 known verbal commitments in the past two weeks alone.

Meanwhile, standard offseason strength and conditioning programs have been impossible to replace, worrying coaches who fear that players may be able to return to campus in the late spring or early summer but will need an extended stretch to train and prepare for the rigors of the regular season.

"At that point, when we do start going again, that’s when everything comes to roost," said Old Dominion coach Ricky Rahne.

Because most athletes don't have access to a home gym and many could be limited in terms of being able to run outside, strength coaches have tried to tailor specific workout plans based on what's on hand — and if using real weights is a problem, plans have subbed in backpacks filled with sand or books, large jugs of water and furniture.

Anticipating an extended break from on-campus activities, USC began shipping to players exercise equipment such as medicine balls, workout bands and rollers. With some portion of every roster dealing with injuries or coming off surgery, programs have established at-home plans related to physical therapy.

Planning ahead "allowed us a little bit of sanity," Helton said. "I think we’re a lot further advanced because of that."

Washington State has held online push-up parties and issued workout challenges on group chats. Strength coaches at South Florida film a workout during the day and post it overnight on a private Instagram page set up for players, who wake up the next day and try to follow the suggested drill. Under today's circumstances, it's the closest teams can get to an established routine.

Is Jimmy Garoppolo playing vs. Packers? 49ers QB dealing with thumb, should injuries for playoff game