"Just want to thank everyone for the overwhelming love and support today," Allen wrote Sunday evening. "This is the unfortunate part of the game we play, but there's no adversity you can't overcome!! I promise I'll be back stronger, and better because of it ✊🏼✊🏼 Loved every second of my first year in Washington, I can't wait for more!"

Allen suffered a dislocated ankle late in the first quarter of a 23-20 loss against the New York Giants and will have surgery to repair the issue. 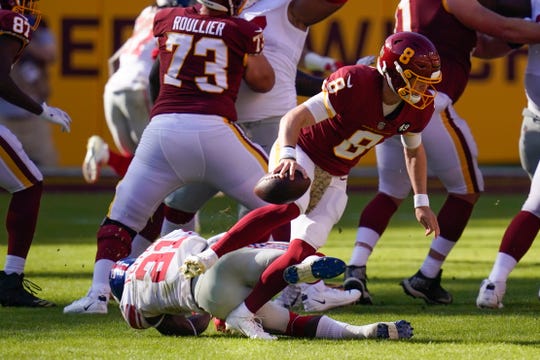 The play happened when Giants safety Jabrill Peppers brought down the 24-year-old, second-year passer with a leg whip that pinned Allen's ankle to the turf. Allen, who needed to be carted off, threw for 62 yards on 5 of 7 passing.

Just want to thank everyone for the overwhelming love and support today. This is the unfortunate part of the game we play, but there’s no adversity you can’t overcome!! I promise I’ll be back stronger, and better because of it ✊🏼✊🏼 Loved every second of my first year in Washington, I can’t wait for more!

Peppers said after the game that the hit was unintentional and said he apologized to Allen.

Backup Alex Smith, who had suffered his own significant leg injury two years ago for Washington, stepped in for Allen and nearly helped the team pull out the come-from-behind victory. Smith finished the day 24 of 32 for 325 yards and his first touchdown since Nov. 11, 2018. Smith, however, also threw three interceptions, including a pair late in the game that all but ended Washington's hope of a comeback.

Though Allen, who had been named the team's starter in Week 5 after previous starter Dwayne Haskins had been demoted, hinted that his season was likely over, Washington coach Ron Rivera was not ready to rule Allen out for the remainder of the year.

Rivera announced that Smith will start in place of Allen moving forward and that Haskins would serve as Washington's backup.

Allen played in four games this season and completed 69% of his passes for 610 yards with four touchdowns and one interception.

Trevor Lawrence should pull an Eli Manning because the Jets are the Jets (all the way!)