The Washington Capitals' game against the New York Rangers was an ugly, fight-filled affair for long stretches, but it did produce a touching moment late in the proceedings.

Capitals forward T.J. Oshie recorded the fourth regular-season hat trick of his career in his first game back in the Washington lineup following the death of his father Tim at age 56. Oshie missed Monday's game against the Rangers before announcing the death of his father, who had been diagnosed with Alzheimer's disease in 2012, on Tuesday morning.

Oshie opened the scoring Wednesday night with a power-play goal just 12 seconds into the second period. He added another tally on the power play later in the frame, then secured the hat trick – his first since 2017 – with an empty-net goal in the third period.

The emotion showed for Oshie on the bench following his hat trick goal, which helped the shorthanded Caps finish off a 4-2 victory.

The Capitals wore helmet decals with "Coach" written on them in honor of the late "Coach Osh."

Tim Oshie was on hand for the celebrations when the Capitals captured the 2018 Stanley Cup, and his embrace with son T.J. – and the younger's interview about "Coach Osh" – were among the most emotional moments of the Caps' championship victory.

TJ Oshie talking about his dad wrecked me pic.twitter.com/2A2hjmx8TE

Oshie and his dad, Tim. Sometimes a picture really is worth 1,000 words. pic.twitter.com/BiGQ1c0EAm 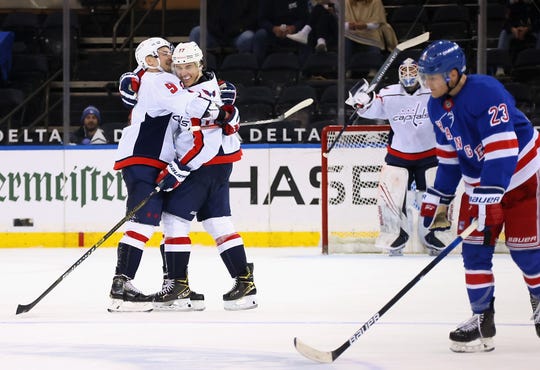