The Australian Grand Prix will remain at Albert Park until at least 2035 after the Victorian government announced a 10-year contract extension on Thursday morning.

In a statement, Martin Pakula, Minister for Tourism, Sport and Major Events, said it was the longest contract extension since the race was brought to Melbourne from South Australia in 1996.

“The Australian Grand Prix has never been bigger, with more than 419,000 people flocking to Albert Park for this year’s race. We know how important this event is to our economy and that’s why we’ve delivered the longest extension for the race since it has been held in Melbourne,” Pakula said.

The program will also be expanded to include Formula 2 and Formula 3 from next year.

“I am delighted to confirm that Melbourne and the Albert Park circuit will continue to be on the Formula 1 calendar until 2035,” said F1 president and chief executive Stefano Domenicali. 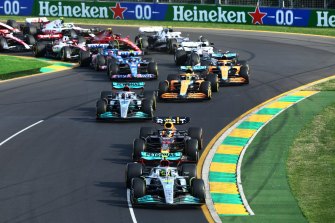 The Australian Grand Prix is staying in Melbourne, with a contract extension announced.Credit:Getty

“The race has always been a favourite for the fans, drivers and the teams and Melbourne is an incredible and vibrant international city that is a perfect match for our sport.”