F1 preview: A lap of the Hungarian Grand Prix

George Russell will line up at the front of the grid for today’s Hungarian Grand Prix after securing his maiden pole position at the end of yesterday’s qualifying session. The Mercedes driver, who is yet to win a race in F1, produced a stunning lap to pip the likes of Carlos Sainz and Charles Leclerc in the dying seconds to ensure the best-placed starting position for this afternoon’s 70-lap contest.

Russell’s qualifying result marked a first pole of the year for Mercedes, who have struggled to keep up with the pace of Ferrari and Red Bull over the course of the campaign to date. It was a different story for Lewis Hamilton, though, with the 37-year-old set to start from seventh on the grid after a DRS failure hampered his efforts at the end of Q3.

Red Bull, meanwhile, will have plenty of work to do to climb up the order following their disastrous showing against the clock on Saturday afternoon. A power unit issue for Max Verstappen saw him resigned to a 10th-placed grid slot, while Sergio Perez failed to make it out of Q2 and will be desperate to get himself back into contention for a welcome haul of points when the five red lights go out later today. 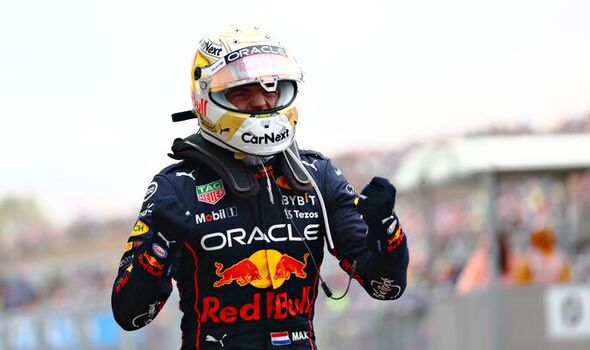 The rain that fell throughout yesterday’s on-track action is holding off for now, but the wind is picking up and it remains to be seen if the conditions will shake things up between now and the end of the race.

A few ominous-looking clouds are hanging over the Hungaroring but the circuit remains dry as things stand.

George Russell managed to grab a surprise pole at the end of Saturday’s qualifying session to the delight of all those in the Mercedes garage.

The 24-year-old left it late to pip Carlos Sainz in the dying seconds with a stunning lap to get the Silver Arrows back on top for the very first time this season.

He will be joined on the front row by Sainz, who went quicker than third-placed Charles Leclerc at the end of Q3, while Lando Norris also did well to put his McLaren car up in fourth.

Red Bull endured a nightmare session, though, with Sergio Perez being knocked out in Q2 before Max Verstappen was hit with a power unit issue as the clock ticked down.

Catch up on the full story here.

Hello and welcome to Express Sport‘s live coverage of today’s Hungarian Grand Prix, where George Russell will start on pole position for the very first time in his F1 career.

The Mercedes driver will be aiming to secure his maiden race victory over the course of today’s 70-lap contest in Budapest but will be firmly tested by the likes of Carlos Sainz and Charles Leclerc from the outset.

Lewis Hamilton will have plenty of work to do to climb up the order from seventh on the grid, though, while Max Verstappen starts from 10th but will be looking to make plenty of progress before the chequered flag drops.

We’re just half an hour away from lights out at the Hungaroring and will be keeping you up to date with all the on-track action as it unfolds.