F1 LIVE: Turkish Grand Prix – Lewis Hamilton looks to land record-equalling seventh world title but he will have to do it from sixth after chaotic qualifying session… and the weather has already caused Antonio Giovinazzi to crash on the formation lap!

Lewis Hamilton has it all to do if he is win an record-equalling seventh world title in Istanbul after the Brit endured a torrid time during qualifying on Saturday.

Hamilton only needs to finish in front of Mercedes team-mate Valtteri Bottas to land the championship with three races left but is prepared for a very tough race after he  struggled on the wet and newly resurfaced circuit over the weekend.

The chaotic qualifying session did throw up a career’s-first pole position for Racing Point’s Lance Stroll, who got to grips with the treacherous conditions to go fastest on Saturday.

Max Verstappen starts alongside the Canadian for the race while Stroll’s team-mate Sergio Perez also enjoyed a quick qualifying session and starts third on the grid.

Sportsmail’s Sam McEvoy will provide all the live coverage from Istanbul Park.

The track is wet and greasy, which promises to be an exciting race for F1 fans.

Can Lewis Hamilton wrap up the title today? Will Lance Stroll stay ahead of the pack come the end of the race?

We’re just 10 minutes until lights out.

All drivers except the Williams are on the grid as the fighter jets fly over the track.

This is going to be a crazy race. Dry, the newly relaid track is an ice rink. Wet, it us even worse. It is wet for the start, so watch out.

Giovinazzi has slipped off on the way to the grid. George Russell, too, entering the pit lane – like Hamilton in Shanghai in 2007. They can’t even get to the start.

This is good for the sport. Enough mollycoddling of the world’s best drivers. Get on with it!

And now Russell has damaged his front wing after colliding with the wall after entering the pit lane.

He’s come on his radio saying he’s crashed at walking pace. There’s just no grip out there.

Both Williams will start from the pit lane with Latifi also experiencing problems. 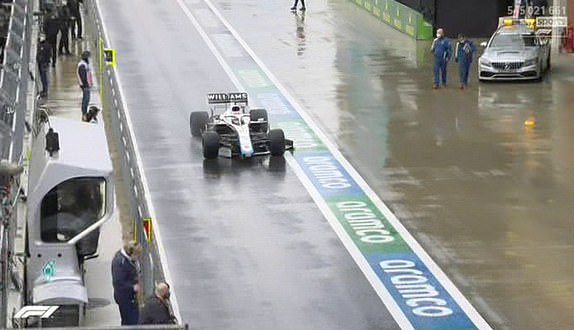 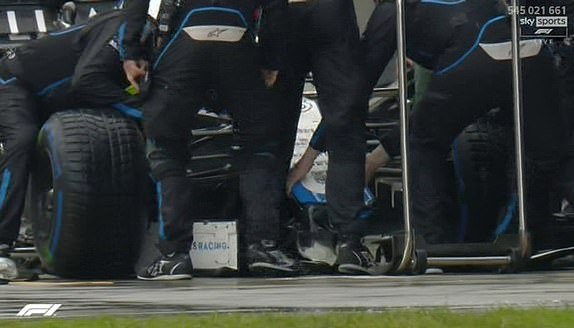 Oh dear, oh dear. What a terrible start for the Italian.

He’s put his Alfa Romero into the gravel while driving round on the formation lap after he skidded off the track and put it into the wall in Verstappen-esk fashion.

He’s managed to rescue his car and is back on the grid, with his team now fixing that front wing ahead of the race.

How many more times will we see this today? 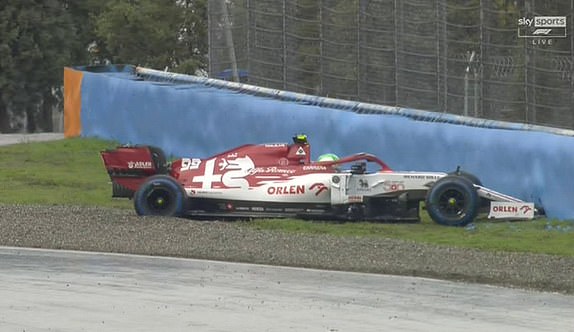 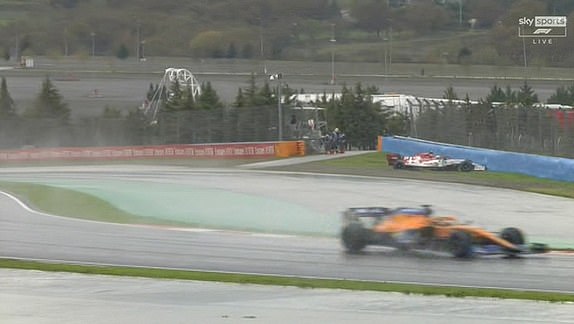 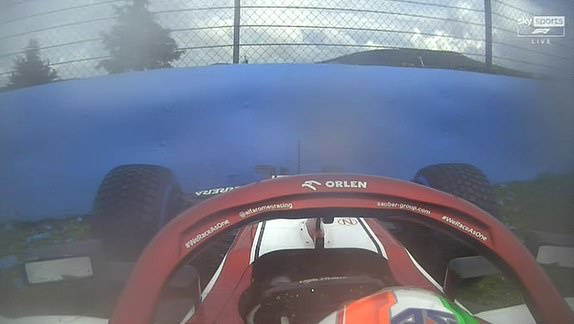 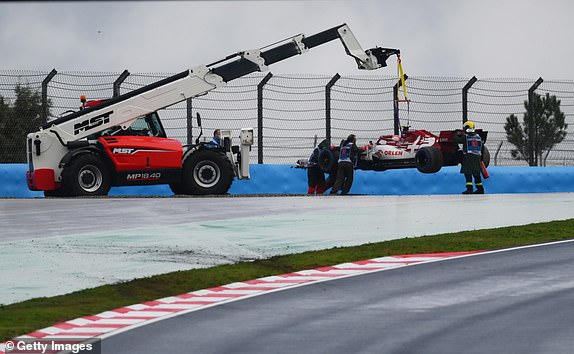 Lewis Hamilton was given a reminder on Saturday of the booby traps he must sidestep if he is to finish Sunday’s Turkish Grand Prix as a seven-time world champion.

For a rain-soaked, two-hour qualifying session threw up one of the most surprising pole men in recent memory, Racing Point’s 22-year-old Canadian Lance Stroll, with Hamilton unusually back in sixth place.

Further wet weather is forecast for Sunday, but even if that fails to materialise there remains an obstacle in the form of a recently resurfaced Istanbul Park track more suited to Torvill and Dean than Lewis and Mercedes.

A big dark cloud has made its way to Istanbul Park and the rain has started to pour.

It looks like we’re in for another chaotic day of racing in Turkey while fans can expect repeat scenes of qualifying.

Looks like teams will be starting on the full-wets for this one.

And welcome to Sportsmail’s coverage of the Turkish Grand Prix!

Today promises to be a historic day should the results fall in Lewis Hamilton’s favour, which would see him become a seven-time world champion – equalling Michael Schumacher’s record.

However, if Friday and Saturday are to go by, he could face a real fight in making that happen.

The Brit struggled to nail down any sort of rhythm during the three practice sessions before only managing a sixth-place start for today’s race due to a wet and newly resurfaced circuit.

While the treacherous conditions hindered the majority, the two Racing Points enjoyed the conditions, with Lance Stroll starting on pole – a first in the Canadian’s career.