On the first lap of the race, the pair’s cars made contact after Perez attempted to overtake Russell, with the incident eventually forcing Perez to retire from the race altogether. Russell was later hit with a five-second penalty over the collision, but Palmer believes the Mercedes driver did not deserve to be penalised.

In a video on F1’s official YouTube channel analysing the collision, Palmer said: “The stewards, in my mind, inexplicably gave Russell a penalty. I think that’s because of the outcome rather than the actual infringement.

“I think that’s because you’ve got one driver spinning off backwards in the gravel, and you’ve got Russell on the inside who managed to carry on. That must be the reasoning of the stewards.

JUST IN: Lewis Hamilton and George Russell ‘can get heated’ admit Mercedes 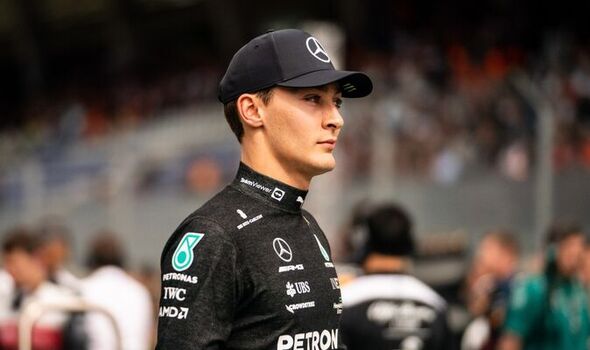 “He gets onto the curb, and it just causes him a slight moment of understeer into Perez. Look how much space Checo has on the outside. He can use a load more space trying to get this move done.

“He’s trying to pinch across towards the inside of Russell. For me, this is kind of a similar incident to Albon, and it’s a racing incident where both have kind of run into each other here. It’s a risky move, and it hasn’t paid off. I think the stewards called it wrong.”

Both Russell and Perez blamed each other for the collision, with Russell saying: “It was obviously very frustrating to have the first-lap incident. I braked late and braked hard and Checo had a clean line, as soon as he started to turn in I knew we were going to make contact. 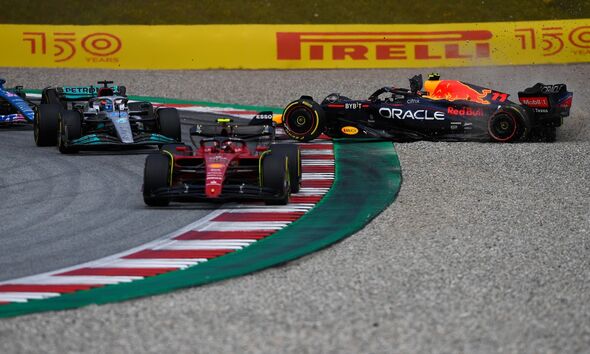 “I was already on the limit with my car, braking and turning as hard as I could, he just had more grip on the racing line. The contact and the penalty is one thing but to get the damage as well, it probably cost me 10 seconds in the first stint and then a 20-second pit stop before coming out in 17th, retrospectively it was okay but I just felt like I expected more.”

Perez, however, said: “I clearly felt, from our side, that we did everything we possibly could to avoid the incident. It was only lap one and it was up to George to control his car. He couldn’t control it, clearly. We ended up making contact when I was clearly ahead.”