Sebastian Vettel suffered an early retirement from the Italian Grand Prix in dramatic fashion. The four-time world champion had already endured a dreadful qualifying session, only managed 17th on the grid.

The German was unable to make a jump up the grid in the opening laps though and his day went from bad to worse.

Vettel was seen being surprisingly caught by George Russell down the pit straight before getting on team radio to complain of an issue in his car.

That was soon evident on track as he smashed through the polystyrene marker boards at the first chicane.

Vettel soon slowed down to allow cars a safe distance as his race was brought to an early finish. 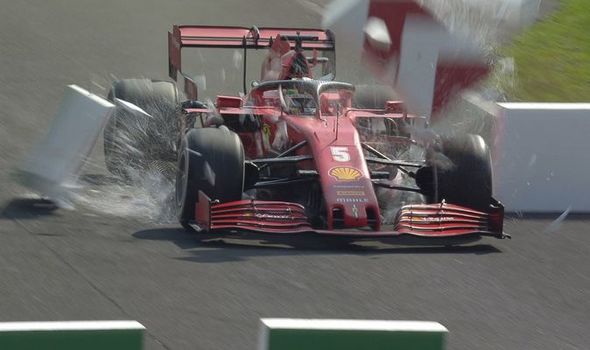 Replays showed Vettel’s rear left sparking with fire as he brought his car back to the garage.

It’s not been much better for his Ferrari team-mate Charles Leclerc.

The 22-year-old recorded a famous win at the Italian Grand Prix last year, leading to wild celebrations among the Tifosi.

Belgian GP: When to watch live on Sky Sports F1 this weekend