“We didn’t know when the victory was going to come – or if it ever would come.”

It took Jenson Button six years and 113 races to win his first Grand Prix in Formula 1 but when it arrived at the 2006 Hungarian GP, it was one of the most dramatic and popular breakthrough successes in years.

Fourteen years on from a rain-hit day at the Hungaroring and the now pundit and 2009 champion relives one of the most important moments in his stellar career with colleagues old and new in the second Sky F1 Watchalong.

Airing for the first time on Sky Sports F1 and Main Event on Wednesday at 7pm, Button is joined by three men who had very different roles on that wet Sunday in Budapest when the Englishman triumphed from an unlikely 14th on the grid. 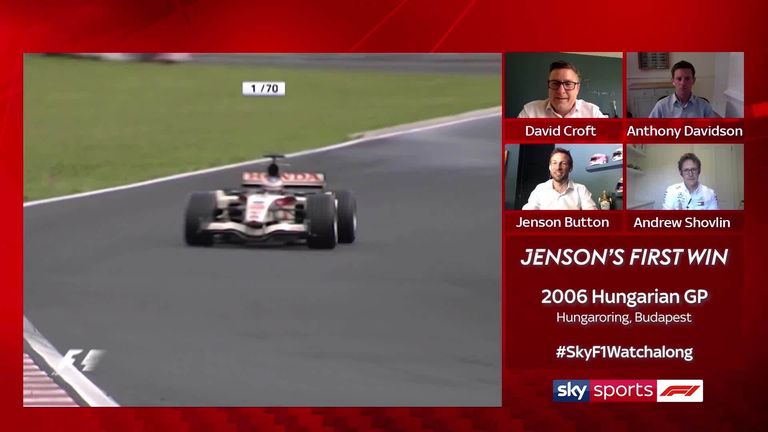 Andrew Shovlin was Button’s race engineer at Honda that day and has since gone on to play a central role in the success of the team the Brackley outfit later morphed into – Mercedes.

Anthony Davidson, a friend and racing contemporary of Button, was Honda’s test driver in 2006 and had already driven the RA106 that weekend in Friday practice, before heading for a guest co-commentator role covering for a holidaying Martin Brundle on TV over the weekend.

David Croft, meanwhile, was in his first season as a radio commentator in F1 and completes our Watchalong quartet to guide you through the action.

It was lovely to reminisce with a couple of key people from the 2006 season, I hope you enjoy watching this as much as we did.
Tonight's #SkyF1Watchalong! 📺 Is my first victory in an exciting Hungarian GP. 7PM on Sky Sports F1 Facebook, YouTube#SkyF1 #EveryRaceLive #F1 pic.twitter.com/bJ4W8bB0sb

What makes Hungary 2006 stand out

Button’s maiden victory did not come in just any race – or indeed any season.

It was achieved amid one of the most titanic title battles of the 21st century so far between young reigning champion Fernando Alonso and seven-time title winner Michael Schumacher. The rivals headed to Budapest separated by 11 points in the championship, with Ferrari on a charge after a hat-trick of summer wins for Schumacher.

But both drivers had courted controversy in practice sessions earlier in the weekend for separate warning-flag misdemeanours and had two seconds added to their best lap times in qualifying.

It meant Schumacher started from 11th and Alonso from 15th, with Button in between.