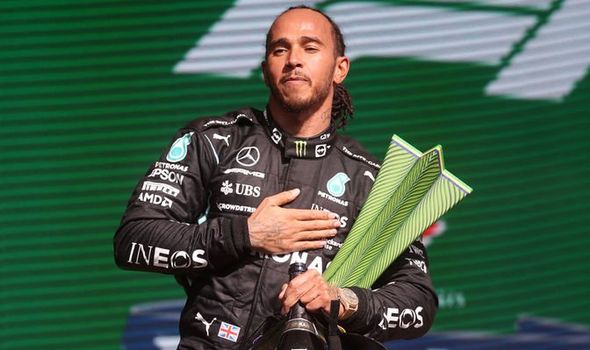 Lewis Hamilton has been penalised for the third time in as many days following the conclusion of the Brazilian Grand Prix. The Mercedes star had already been disqualified from qualifying on Friday due to his rear wing falling outside of the regulations. He was also slapped with a five-place grid penalty for the main race because he required an engine change.

Hamilton fought against all the odds to carve through the field and beat title-rival Max Verstappen to claim his sixth victory of the season.

But he again found himself in hot water when celebrating his titanic triumph. The 36-year-old took off his seat belt when stopping to collect a Brazilian flag from a steward after he crossed the chequered flag.

In doing so he broke a crucial FIA safety regulation and was consequently hit with a £4,200 fine and a further £17,000 fine, suspended until the end of 2022.

The stewards noted: “The driver of car 44, Lewis Hamilton, undid his seat belts on the in-lap at the end of the race.

“While the stewards are sympathetic to the desire to celebrate, it is fundamentally unsafe to undo the seatbelts while the car is in motion.

“Slow speeds in these cars are very fast for an unrestrained occupant.

“Further, Formula 1 drivers set the example for junior categories. It is critical that junior category drivers learn the importance of using all the safety devices of the car at all times.

“The suspension of the penalty is subject to compliance with Appendix L, Ch. III of the ISC during the period specified.”

There was a slight fear that Hamilton’s race victory could be under threat from the late investigation but he got away lightly.

“What a race!” Hamilton said after his win.

“The team did an amazing job. Valtteri did a great job to get as many points as possible.

“Coming into this weekend I never ever thought we would be able to close the gap like we had today.

“Then these things that just kept going against us but it really shows for everyone, never give up. Never, ever stop fighting and that’s how I’ve really approached this weekend.

“It feels like the first because I don’t feel like I’ve had a win for a long time.”