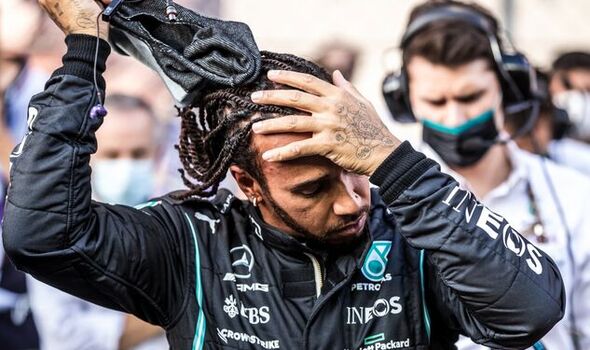 A leading figure at Mercedes has conceded the team tried to push Lewis Hamilton’s car “too far” following his turbulent weekend in Saudi Arabia. Hamilton, 37, was eliminated in Q1 at the Jeddah circuit for the first time since 2017, and the first time on speed alone since when he was at McLaren in 2008.

It meant he started the race from 15th on the grid, elevated a place due to the withdrawal of Mick Schumacher, but seemed set to pull off a damage limitation job when he rose to sixth. However, a safety car scuppered his strategy and after an impromptu pit stop, he reemerged 12th, outside the points finish.

Two late overtakes did secure the 37-year-old a top ten finish, even if he initially appeared unsure what that meant, but failed to mask a difficult few days for the seven-time world champion. Indeed, he goes into next week’s Australian Grand Prix already 29 points behind early championship leader Charles Leclerc.

And with Silver Arrows clearly off the pace when compared to Ferrari and Red Bull, trackside engineering director Andrew Shovlin has conceded they tried too hard to bridge the gap between Bahrain and Saudi Arabia. However, Shovlin also argued the weekend represented a “useful exercise,” with George Russell finishing fifth.

“So, we are always exploring the setup with Lewis, trying to find a direction that delivers performance and we’d found a good direction from Friday into Saturday that he was able to try in the third practice session,” he said, via gpfans.com.

“We went quite a bit further on that into the qualifying session, but ultimately it was a bit too far,” continued Shovlin. “So, from the word go, he was lacking rear grip, Jeddah is a street circuit that you need a lot of confidence, it’s very fast, the walls are very close and when you haven’t got the rear grip, the driver can’t have that confidence.”

New driver Russell, 24, fared better, qualifying sixth and crossing the line fifth, but huge question marks remain as to whether Mercedes have the time to sort their issues out and launch a title challenge. And Shovlin admitted there could be further problems unless things can be addressed imminently.

“Fundamentally though the problem right now is the car is not fast enough and unless we get it perfect, we are going to be at risk in those sessions,” he added. “So, we need to make a quicker car as soon as possible.”

Proof Daniel Ricciardo is a man of his word