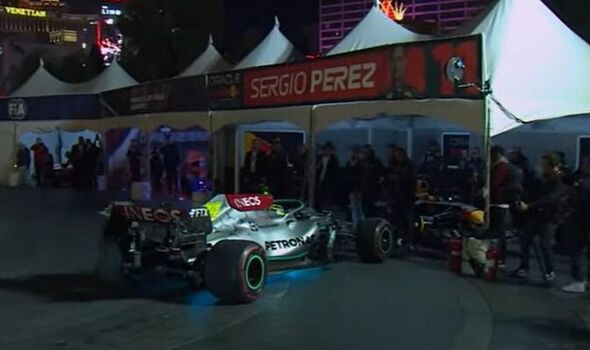 F1 commentator David Croft joked any ‘rumours’ of Lewis Hamilton joining Red Bull are not true after the Brit mistakingly drove into Sergio Perez’s base for the Las Vegas launch party on Saturday night. Las Vegas is set to take centre stage on the F1 circuit next year in the penultimate race of the 2023 season.

It’s set to be the most expensive race weekend in F1 history with the cheapest tickets currently being available at £1700 [€1956]. F1 also brought out the big guns for the official ‘launch party’ as Hamilton was joined by his Mercedes team-mate George Russell along with Red Bull’s Perez.

A small section of the famous Las Vegas strip had been marked off for thousands of fans to line up and watch F1 cars take to the road. Perez and Russell were up first before Hamilton took to the strip, sporting a blue neon light underneath his car to help with visibility.

Hamilton had fans thrilled as he performed multiple burnouts and waved to the crowd before seemingly bringing his stint to an end. Teams had temporary garages set up outside Caesars Palace, which proved a test for an F1 car attempting to go around a roundabout.

And Hamilton struggled to get his Mercedes all the way around as he came to a stop directly outside Perez’s base. F1 pundit Naomi Schiff joked: “Parked at the wrong garage there.”

And Croft quipped about Hamilton’s immediate future at Mercedes. He said: “The rumours that Lewis Hamilton is about to join Red Bull are not true.

“He’s very happy at Mercedes and I’m sure soon will be signing a new long-term contract.” The circuit for the Las Vegas Grand Prix will be set up in the heart of the strip itself with drivers going past iconic venues such as the Bellagio and the Venetian.

It also looks set to join a number of races seen as the sport’s highest-speed tracks, comparable to Monza. The estimated top speed is predicted to be around 212mph with two DRS zones around the 3.8 mile circuit.

The Las Vegas Grand Prix is also set to be unique in the fact the main race will take place on Saturday instead of the usual Sunday proceedings.