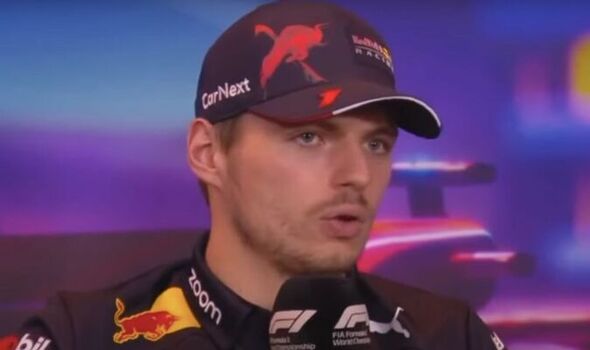 Max Verstappen lost his temper when documenting his immense frustration at the way he has been perceived in the media following the Brazilian Grand Prix – where he refused to let Sergio Perez claim sixth spot upon Red Bull instructions. A lot has been said about the Dutch world champion in the aftermath of the unique incident in Sao Paulo, while Verstappen also revealed his family have been subjected to sickening online abuse in the days that followed the race.

The 25-year-old Dutchman remains adamant he had his reasons to ignore the radio message mid-race and claims he will have no problem helping Perez edge rival Charles Leclerc in the final race in Abu Dhabi this weekend.

Tensions had threatened to reach boiling point when Checo declared Verstappen’s antics “show who he really is” as the Mexican struggled to digest the unexpected blow.

But following crunch talks with both drivers, Red Bull bosses now consider the matter resolved – as does Verstappen.

Yet that didn’t stop the two-time world champion from getting his own personal fury off his chest as he accused the media of dramatising the events in Brazil to paint him in a bad light.

Verstappen said: “After the race I looked very bad in the media, but they also didn’t have the full picture. To immediately portray me like that is really ridiculous.

“They don’t know how I work within the team and what the team is doing. All the things I’ve read have been pretty disgusting.

“We’re moving on now. I have a good mutual relationship with Checo but I just don’t get why people attack me if they don’t have the full picture. Hopefully one day they’ll understand what was really going on, because this behaviour is really unacceptable.

“It’s also happening here in the Formula 1 paddock. It’s not even just about the fans. What some have written about me is ridiculous. I’m not going to go into the matter because it’s between me and the team. Still, it is extremely disappointing that everyone immediately writes such bad things when they don’t have all the facts.”

He later added: “I’m just done with all this b******t. As soon as something negative happens, it has to be highlighted. Really sickening, to be honest, to be a part of that. In the end, I didn’t do anything wrong at all, but everyone just didn’t understand what went wrong.”

Verstappen says the alleged one-sided media coverage has seen his family bombarded with abuse and harassment – something he wants stopped immediately.

His mother, sister, girlfriend and father have all been “attacked” online as the Red Bull star urged F1 fans to direct any ill-feeling towards him and not his innocent loved ones.

“That needs to stop. If you have a problem with me, fine, but don’t go after my family. That’s unacceptable,” he added.

“If your own sister lets you know it’s getting too much and something needs to be done about it, then I think that says enough. Then it hits me, because you can’t touch my family.”

Meanwhile, Perez remains in the dark over the sequence of events after Verstappen ruled he refused to let his team-mate pass due to a previous incident.

It’s understood the world champion was referring to qualifying in Monaco when Checo’s crash prevented Verstappen from surpassing him.

The Mexican has now urged his team-mate to clarify his comments, saying: “We keep everything internal. Whether it’s Monaco or something else, that’s up to Max to tell. I don’t know how long he’s been running something.

“We haven’t talked about it substantively. Just everything there is in Brazil That’s where we as a team went through all the scenarios and the mistakes we made.”