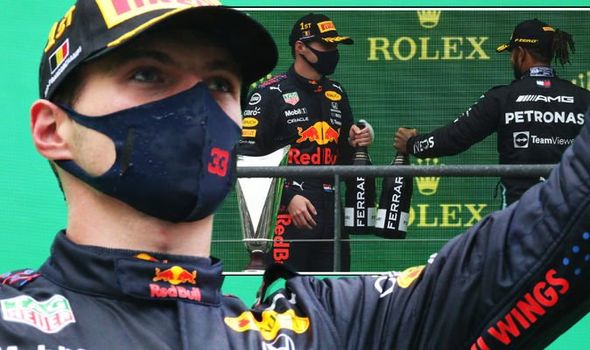 Max Verstappen insists he’s “confident” in his Red Bull car and reminded Lewis Hamilton and Mercedes they have “a few more races” to catch up to them in the championship battle. Verstappen’s comments followed an unorthodox Belgian Grand Prix in which the Dutchman was declared the winner after only two laps of uncompetitive racing.

There was a gap of almost three hours without cars on track at Spa-Francorchamps due to the unrelenting heavy rain.

The conditions rendered it impossible for the drivers to take to the track without a safety car in front of them due to the poor visibility caused by the plumes of spray coming up behind each car, even at a reduced speed.

Two laps were eventually completed at 5.17pm UK time, after the race had been scheduled to start at 2pm, without competitive racing.

That at least ensured that the drivers  took half points and the event didn’t have to be abandoned entirely.

Verstappen as a result took 12.5 points compared to the usual 25 and with Hamilton in third, his eight-point championship lead is now reduced to just three points.

There are another nine rounds to go of the season with the next race, the Dutch Grand Prix, taking place at Zandvoort next weekend.

And Verstappen is confident of hunting down title rival Hamilton, a seven-time world champion, as he looks to win the Drivers’ Championship for the first time in his career.

The 23-year-old said post-race: “In hindsight it was very important to get that pole position. Of course, it’s a big shame to not do proper laps.

“The conditions were very tricky out there. I said at 3.30pm, ‘Let’s go.’ I think the visibility was very low. I think if we would’ve started at 3pm we would’ve had a better chance.

“Nevertheless, after that, it stayed really wet and kept raining. It’s a win but it’s not how you want to win.

“Big credit goes to all the fans around the track to stay here the whole day in the rain and the cold and the windy conditions. They’re the bigger winners today.

“We have to keep on pushing, to keep on trying, to close the gap and of course go ahead. A few more races to do that and I’m confident we have a good car.

“We have to keep on trying to get a bit more performance out of it.”

Hamilton meanwhile reflected before the podium ceremony: “Firstly I feel sorry for the fans today. It’s no-one’s fault with this weather but they’ve been incredible to stick with us this whole time and hold out for a potential race.

“They knew when they sent us out at the end there that the track wasn’t any better.

“They did it just so we could do two laps behind the safety car which is the minimum requirement for a race. I really hope the fans get their money back today.

“You [just] couldn’t really see. Five metres in front of you and the car disappears. It was very difficult down the straights to even know where that flashing light was.

“You couldn’t even go flat out because you didn’t know what part of the track they’d be on. It’s a shame because of course I wanted to race and it could’ve been a great race if it hadn’t rained so hard.”