Max Verstappen looks ready to take the fight to Mercedes in Bahrain GP qualifying after impressively setting the pace in Saturday’s final practice ahead of Lewis Hamilton.

The Red Bull star had trailed Hamilton in both Friday sessions but nailed his soft-tyre laps in P3, with his 1:28.355 0.263s faster than the 2020 Drivers’ Champion and a further tenth of a second clear of Valtteri Bottas.

Verstappen, who completed two qualy-simulation laps with low fuel, was also quicker than both Mercedes after the opening efforts. Hamilton, meanwhile, appeared to have a steering wheel issue at the end of the hour.

Although final practice took place in unrepresentative conditions compared to qualifying and the race – in the sunshine compared to floodlights – Verstappen’s pace raises hopes of a battle for pole, with qualifying starting at 2pm, live on Sky Sports F1.

“To be two or three tenths ahead of Mercedes, that’s a very impressive effort from Max Verstappen,” said Sky F1’s Karun Chandhok.

“And Bottas appears to be back in the game.” 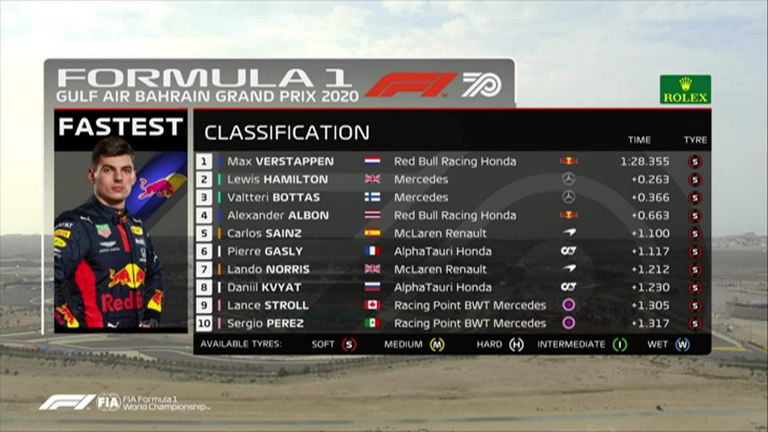 Mercedes found themselves in a Red Bull sandwich, though Alex Albon, who suffered a heavy crash on Friday and subsequently changed his chassis was some way off the pace in fourth, 0.6s slower than his team-mate.

McLaren and AlphaTauri led a competitive midfield, with Carlos Sainz, Pierre Gasly, Lando Norris filling positions five through eight, with Racing Point completing the top-10 ahead of the Renaults.

Ferrari have struggled to join that battle this weekend and Sebastian Vettel was their lead car in 13th in Practice Three, with Charles Leclerc three tenths, and two places, further back.

Alfa Romeo and George Russell look to be leading the fight for a Q2 place once the shootout begins.