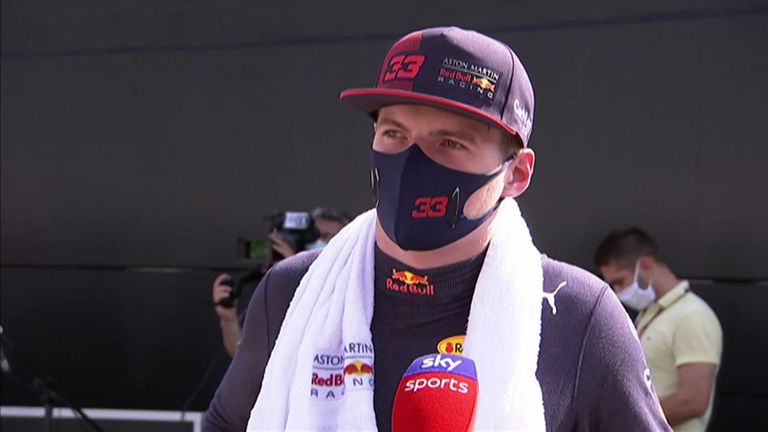 Max Verstappen believes he has his work cut out to repeat his Mercedes-beating success from Silverstone in the Spanish GP – despite the world champions making him “favourite” from third on the grid.

With Mercedes still in a class of their own over a single fast lap this year, Verstappen did the best he realistically could by taking a comfortable third place on the grid on Saturday to ensure he heads up row two.

An all-Mercedes front row did not ultimately deny Verstappen a brilliant victory at Silverstone last week, when his Red Bull car was far kinder on its tyres than the Mercedes in sweltering conditions.

The RB16 looked strong in its race simulations on Friday – even faster than the Mercedes W11, according to Hamilton – but Verstappen is remaining cautious.

“We know they are very fast over one lap, there’s not much we can do about that at the moment. My long runs did feel a bit better, if it’s going to be enough I’m not sure but for sure we will be a little bit closer.” Mercedes struggled with rear-tyre blistering at Silverstone but Pirelli are using harder-compound tyres this weekend, while the world champions have also been working hard on their performance over the past week.

“And I believe Red Bull masters those conditions very well. Nevertheless, the work that has been done during the week and from [Friday] to today was good and I believe we have improved and I hope we can give him a run for his money.

“But definitely Max needs to be seen as the favourite based on yesterday’s long runs.”

Although Alex Albon, Verstappen’s team-mate who qualified sixth, suggested: “Here the [degradation] is a bit more aggressive. Last weekend was more about blisters, here’s about pure deg. If it’s a pure deg race, I think it won’t be as clear and the Mercs will be pretty strong.”

Pretty happy qualifying P3, it’s the maximum we could do today. Let’s keep it cool for the race #KeepPushing 🇪🇸 #SpanishGP pic.twitter.com/w7KsMv25dU

Verstappen hopes to crank up pressure

Naturally, Verstappen said he will be focused on taking chances to move forward if and when they present themselves.

“I hope I can apply a bit of pressure,” said Verstappen immediately after qualifying. “I know that it’s very hard to overtake around here but we’re going to try to do everything we can to be close to them and make it a bit difficult.”

Verstappen’s first chance to put pressure on the Mercedes pair will be before Barcelona’s first corner, in what is one of the longest runs to turn one of the whole season.

“I just hope we can have a clean start,” said the Dutchman. “We know they’ve got a bit of power so getting past them in the straight is not that easy without DRS [which is not activated until lap three]. We’ll have a look.”