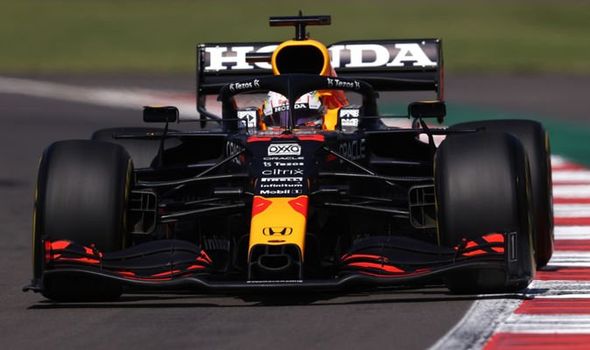 Max Verstappen got off to the perfect start at the Mexican Grand Prix as he passed Lewis Hamilton and pole-sitter Valtteri Bottas on the opening lap to lead the race. Mercedes were by far the quickest during qualifying and had locked out the front row.

But the Red Bull star shot out of the blocks to show that he is not going to give up his championship lead without a fight.

Hamilton struggled to close down the gap to his title rival and exclaimed “He’s too quick” over his team radio.

Verstappen showed no sign of saving his tyres as he continued to beat Hamilton’s lap times to extend his lead.

But Brundle reckons that could have landed him in hot water with his team.

“Max Verstappen will be told off quickly for going too fast,” Brundle said on Sky Sports F1.

Verstappen led by over seven seconds with 20 of the 71 laps completed.

Meanwhile, ahead of the race, Hamilton was confident that his team would be able to hold out ahead of the pack.

“Valtteri did an amazing job today,” hailed Hamilton after qualifying.

“We are both, and the team, surprised and shocked to be on the front row because they have been quicker than us all weekend.

“No matter what we did to improve the car, we couldn’t close the gap much so it is a real shock.

“I don’t really have an answer for it but I am grateful, of course, to be up there with Valtteri to get a one-two.”