Defending Supercars champion Scott McLaughlin is closing in on the championship after landing maximum points in the opening race of the two-weekend Tailem Bend round.

Mustang driver McLaughlin started from pole position and was in control throughout the 31-lap race to win from fellow Kiwi Shane van Gisbergen, in the Holden Racing Team Commodore, with Cameron Waters in the Monster Energy Racing Mustang third.

McLaughlin's winning margin was just over 0.6 seconds but the result rarely looked in doubt, with Waters just over six seconds adrift of van Gisbergen. 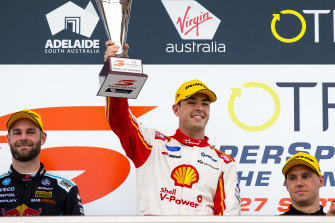 McLaughlin's only real championship rival, Jamie Whincup, was 10th, and he would now need the Shell V Power driver to have a nightmare finish to this weekend to even put himself back into the race.

The New Zealander now leads the standings by 263 points and he can secure the title in the final two races on Sunday and avoid a final round showdown at Bathurst if he ends the day 300 points clear of Whincup.

McLaughlin was quick off line, drove smoothly and within himself. This is a time of the season when winning races is good, but amassing a strong points haul and maintaining a lead in the title race is even more important. 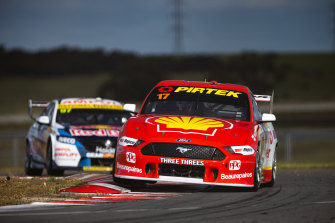 Van Gisbergen did get to within 0.3 of a second of McLaughlin with six laps remaining, but could not get closer.

"Shane was coming at me pretty hard there," said McLaughlin.

"I tried to leave a little bit in the bank when he was coming at me, to charge on when he really got to me and [tried] to get his tyres hot in the dirty air.

"That plan worked for me, the pitstop from the guys was fantastic."

Van Gisbergen said: "It was a pretty good race. Thanks to the Red Bull Holden Racing Team, good car, ran a bit long, did rears [but] he was just too good.

"Maybe if we did a side [changed tyres down one side] it would have had a bit more front grip, but a bit of aero wash and he was placing the car perfectly. I couldn't even get close enough for a lunge."

Waters rued that he had ruined his chances with a poor start.

"I just got a shocking start. The race car was pretty solid, probably had a similar pace to the other boys, I just lost a bit of track position," he said.