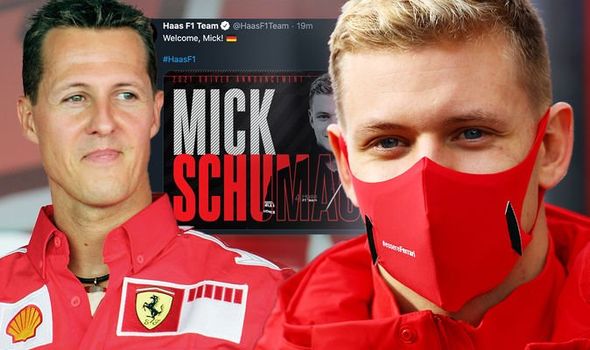 Haas have confirmed that Mick Schumacher will drive for them in the 2021 season, with the German and Nikita Mazepin replacing Romain Grosjean and Kevin Magnussen.

The 21-year-old is the son of legendary seven-time champion Michael Schumacher and is hoping to add the F2 title to his career catalogue after being crowned the F3 European champion in October 2018.

He goes into the F2 season finale in Bahrain with a 14-point lead in the standings over Brit Callum Ilott.

But Schumacher knows whatever the outcome, he will finally be an F1 driver next season – and he credits his dad for his rise through the ranks.

The young German, a member of the Ferrari Driver Academy, got his first taste of F1 cars in April last year by taking part at in-season testing for the Scuderia and Alfa Romeo.

He said: “The prospect of being on the Formula One grid next year makes me incredibly happy and I’m simply speechless.

“I would like to thank Haas F1 Team, Scuderia Ferrari and the Ferrari Driver Academy for placing their trust in me.

“I also want to acknowledge and extend my love to my parents – I know that I owe them everything. I have always believed that I would realize my dream of Formula One.

“A huge thank you must also go to all the great motorsport fans out there who have supported me throughout my career.

“I will give it my all, as I always do, and I look forward to going on this journey together with Haas F1 and them.”