Ferrari caused a surprise on the opening day of the Monaco GP by setting the pace ahead of title challengers Mercedes and Red Bull in second practice.

Already fast on harder tyres in the morning session, Ferrari hit the front with both their cars in the afternoon on the lower-fuel simulations on soft tyres around the famously tight and twisty streets of the Principality.

Ferrari are yet to register a podium finish in 2021, and last won a race two seasons ago, but have been an improved force towards the head of the midfield so far this season after a dismal 2020. Lewis Hamilton, the championship leader, worked his way up to third for Mercedes just ahead of title rival Max Verstappen in the Red Bull but both 2021’s leading teams were nearly four tenths off Ferrari’s pace.

“I’m surprised how competitive Ferrari is,” said Verstappen, who finished nearly four tenths off the pace. “I think it just shows that we are pretty weak. They are doing very well and we are very weak, so then the offset is very big.”

Hamilton said: “The Ferraris are really strong. Surprising to see them improve so much, but it’s great – it means more competition.”

Valtteri Bottas was fifth in the other Mercedes ahead of Lando Norris in the special Gulf-liveried McLaren. Sergio Perez had set the morning pace but slipped to eighth in the afternoon for Red Bull, finishing between AlphaTauri’s Pierre Gasly and Alfa Romeo’s impressive Antonio Giovinazzi. 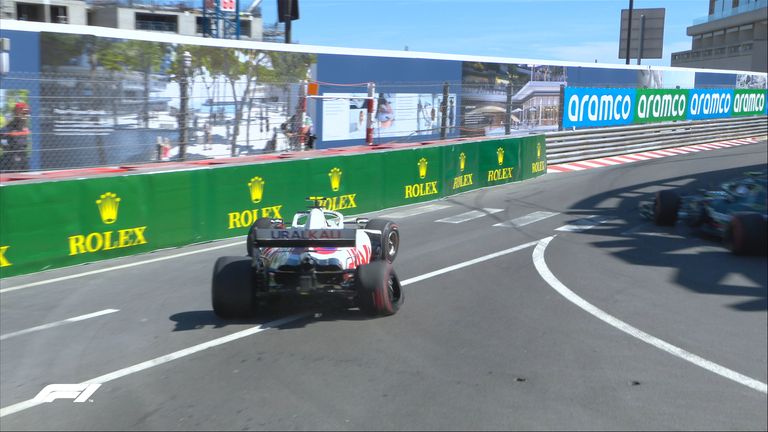 Mick Schumacher, one of four Monaco F1 rookies in the field, brought the afternoon session to a slightly early conclusion when he tagged the barriers at Massenet and brought out the red flags.

Another Monaco novice, Yuki Tsunoda, had earlier lost more significant track time after a clash with the omnipresent guardrails had damaged his AlphaTauri.

Where has Ferrari’s pace come from?

Although the former world champions have been a much-improved force so far in 2021, with Leclerc taking three fourth-place results on the grid already, they still qualified one second adrift of pole last time out in Spain.

But Monaco twisty barrier-lined circuit is very different to the fast sweeps of Barcelona’s Circuit de Catalunya, although Ferrari’s SF21 had shown up well in the one sector of the latter lap which features slower corners.

Although relative fuel levels and engine modes vary between teams during practice, with Ferrari known to run more competitively than some, their advantage on Thursday was still noteworthy.

“They have had good pace the last couple of races. They are very quick – certainly in that last session they were very quick indeed,” said Red Bull boss Christian Horner to Sky F1.

Leclerc’s fastest lap was set later in the session than his rivals, while both the Monegasque and Sainz were the only drivers all day to lap below 72 seconds.

Plenty for 2021’s usual top two to ponder therefore in the unique day’s break from track action that takes place at Monaco before track action resumes for F1 on Saturday morning on what is traditionally the most important qualifying day of the whole season.