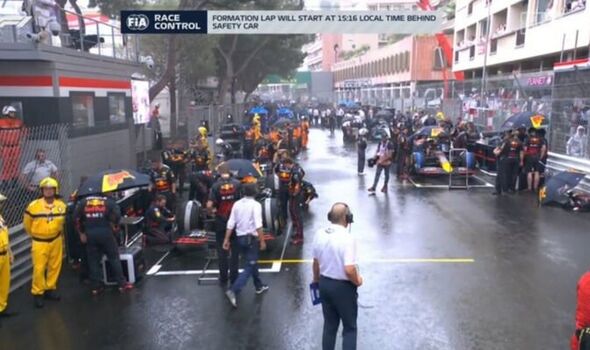 The start to the Monaco Grand Prix was suspended as staff rushed to change car tyres to full wets after rain tumbled down ahead of the race. There was mass confusion on the grid, with Max Verstappen in particular questioning the reason for the delay.

“What are we waiting for?” Red Bull ace Verstappen quizzed over his team radio. It was explained that there would be a mandated start behind a safety car on full wet tyres as rain showered down on the Monte Carlo track right on the start time.

Mechanics raced to fit full wet tyres onto the cars before a formation lap was prompted behind the safety car around 20 minutes after the scheduled 2PM start. Race control was ‘monitoring’ a downpour that had been approaching the circuit in the build-up to the race, and therefore suspended the start time.

The FIA clarified their decision with a statement which reads: “Race control was monitoring a severe downpour that was rapidly approaching the circuit, and as it arrived during the start procedure, the safety car start and its associated procedures were implemented. This was done for safety reasons in consideration that there has been no wet running this weekend.”