‘You can’t play love, peace and harmony’: Nico Rosberg says he has ‘no regrets’ from his Drivers’ World Championship win in 2016 despite his feud with Mercedes teammate Lewis Hamilton

Nico Rosberg has opened up on how his relationship with Mercedes teammate Lewis Hamilton broke down during the 2016 Formula One season.

Rosberg won the Drivers’ World Championship by five points in 2016 but retired shortly afterwards at the age of just 31. 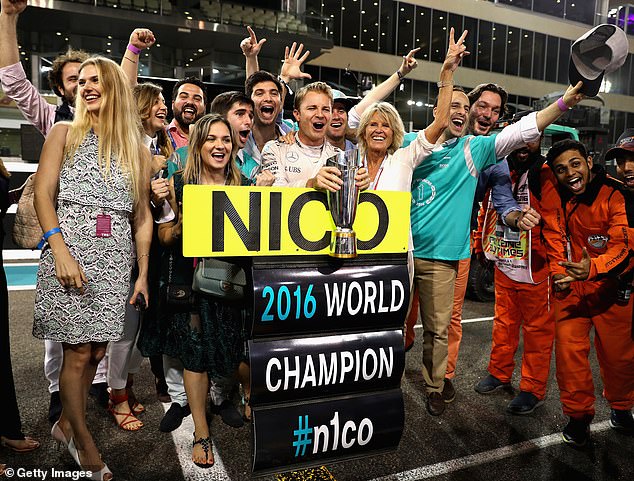 The pair frequently clashed as they battled for the accolade, and received criticism for collisions at the Spanish and Austrian Grands Prix.

In an interview with Eurosport about his rivalry with Hamilton, Rosberg said: ‘It [the friendship breakdown] happened immediately when we were fighting for the world championship, not before.

‘But that’s always the case: When you’re fighting for success in every race and for titles, it doesn’t work anymore.

‘It was a build-up from one race to the next. If you want to decide the world championship for yourself, you can’t play love, peace and harmony.’

Despite the animosity between the drivers in 2016, Rosberg feels they get on better now, and is proud of his achievements with Mercedes. He said: ‘I don’t regret anything from the battle with Lewis.’

‘That was a sensational time and a mega fight. I’m very proud of that. In the meantime, we’ve returned to neutral, which is okay.’

‘You have to test limits and go into grey areas to win, especially when two drivers are at such a high level. Then it often gets tight.’

Hamilton is currently sixth in the 2022 Drivers’ World Championship, 99 points off leader Max Verstappen, and looks unlikely to secure a record-beating eighth title this year.