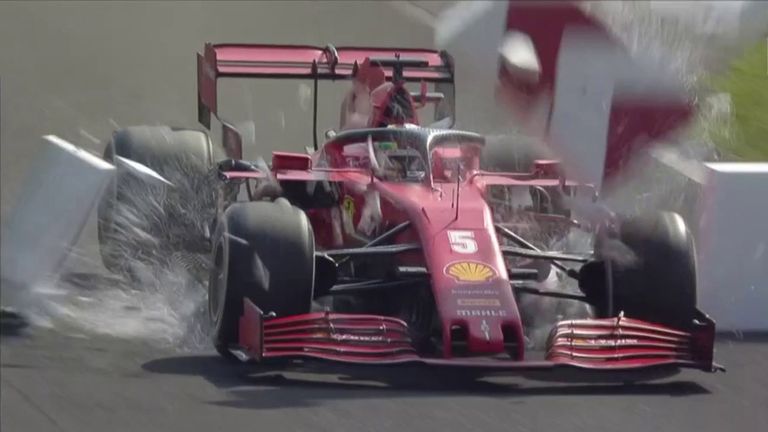 Sebastian Vettel confessed that expectations at Ferrari were very low after another hugely disappointing day in the Scuderia’s home Grand Prix.

Historic standard-bearers and Italian behemoths Ferrari fell flat on their face at Monza, with both drivers failing to finish to compound a miserable weekend after Vettel dropped out of Q1 and both missed out on the top 10 in qualifying for the first time since 1984.

Ferrari’s home race no-score was the first since 2005 while they have now slipped behind Renault to sixth place in the Constructors’ Championship.

And Vettel, who is leaving the team at the end of the season to be replaced by McLaren’s Carlos Sainz, admitted it was for the best the famously partisan ‘Tifosi’ fans were unable to attend.

“It’s very difficult for us at the moment for sure, for the whole team,” said Vettel to Sky F1 after he dropped out early with a brake failure.

“We need to try and do the best we can to have a worthy ending to the season.

“Obviously we have lots of races ahead of us, still a lot of stuff to pick up and understand. There’s plenty of work, so we have to be focused on that.

#Seb5 had to retire due to a brake issue and #Charles16 crashed heavily at the Parabolica. He is ok. A race to forget. #ItalianGP🇮🇹 #essereFerrari🔴 pic.twitter.com/tXgEa0rwbh

“If I could choose, I don’t want to be here, I want to be in the car on the track and not at the back of the field but the front but sometimes you don’t get to choose, you have to deal with what you have. At the moment that’s what it is and we have to keep our heads up even if it’s difficult.

“Probably in that regard it’s good there were no fans.”

Vettel is languishing in 13th in the Drivers’ Championship while team-mate Charles Leclerc lies in seventh.

And the 33-year-old called for realistic expectations in future races given the car’s clear lack of competitive pace.

He added: “Certainly it’s tough for all of us because our main focus is the car, the race, especially in Monza but we have to look forward to next week and look at the positives, even if there are very few.

“You see where we are, we can’t expect an awful lot. The last couple of races we’ve struggled to make the car work 100 per cent.

“I hope at Mugello we’re in a better place but that doesn’t mean we’re fighting for the podium. We need to be realistic, expectations are very low.”

Big crash today. A bit sore but okay, impressive how much these cars can take nowadays. Thanks all for your messages. pic.twitter.com/M5phPOILHh

Leclerc blames himself for nasty crash

The young Monegasque, 22, took responsibility on himself for the high-speed collision with the tyre wall.

“I just lost the car. It’s my fault,” said Leclerc, who was running sixth after gaining ground in the pit stops around the Safety Car.