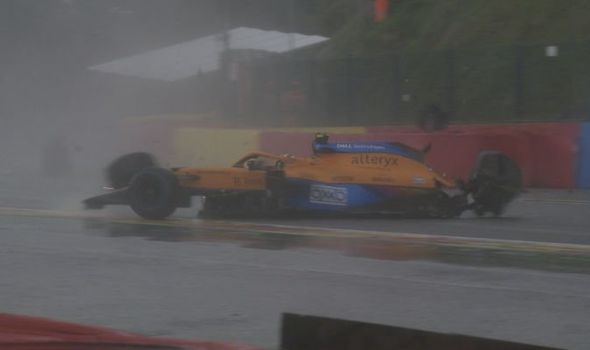 Lando Norris suffered a big crash in Q3 during Belgium Grand Prix qualifying with the session red-flagged after the McLaren driver went off in slippery conditions. Norris catapulted into the wall back-end first at Eau Rouge and the accident left Sebastian Vettel furious after he had warned about the hazardous tarmac minutes earlier.

Asked if he was OK following his nasty-looking incident, Norris replied simply ‘yeah’ while sounding winded, before adding: “I’m sorry boys. I let you down, my bad.“

Thankfully he got out of the car unscathed to huge cheers from the fans at Spa, though appeared to be holding his wrist and arm.

Norris was immediately sent to the medical centre for check-ups to assess any potential injuries.

He suffered a big impact with the barriers on the outside of the high-speed Eau Rouge as his McLaren spun and collided with the wall.

Following some oversteer, the 21-year-old looked to lose control of his car and as he tried to correct the car, he careered off track.

Norris’ crash came just after Aston Martin’s Vettel called on race control to red flag the session over his team radio due to the standing water all over the track.

“They should red flag, there’s too much water,” the German said. He followed that up with an emotional message after learning of Norris’ off.

An irate Vettel reacted: “What the f*** did I say? What did I say? Red flag. Unnecessary. Is he OK?”

Four-time world champion Vettel was the first on the scene after Norris’ crash and slowed down to check his fellow driver was OK.

The Briton had also raised similar concerns about the amount of water on the circuit, insisting: “Quite a bit of aquaplaning.”

Norris had gone fastest in both Q1 and Q2 before his shunt into the wall which likely means he will start from the pits for Sunday’s race.

McLaren tweeted afterwards: “So glad to see you safely out the car after that one, Lando.”

Mercedes posted in reaction: “Lando’s had a big one at the top of Raidillon. Fantastic to see him get out of the car. They build them strong in Woking.”

Similarly, Williams wrote: “Red flag as Norris has a nasty crash. So glad to see him out of the car.”

Red Bull said: “Fantastic news to hear that he’s OK,” while Ferrari tweeted: “Glad to know he is fine @McLarenF1.”