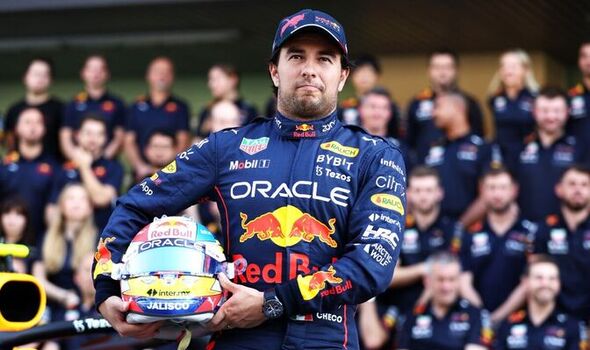 Sergio Perez doesn’t want to add any “extra speculation” to the theory Max Verstappen’s angry radio message from the Brazilian Grand Prix stemmed from events at Monaco earlier this year. The two Red Bull drivers were not on good terms in the immediate aftermath of the race at Interlagos last weekend when Verstappen denied team orders to let Perez back through into sixth.

Verstappen’s refusal to let Leclerc past now means both the 25-year-old and Perez are level on points heading into the season finale in Abu Dhabi. The Dutchman gave little away when he explained after the race why he didn’t listen to team orders from Red Bull.

He angrily stated: “I told you already, the guys don’t ask that again to me, ok? Are we clear about that? I gave my reasons and I stand by it.” It’s since been reported that Verstappen’s anger stems from what happened at the Monaco Grand Prix when Perez crashed, which denied the two-time world champion a chance to qualify on pole.

And Verstappen was left frustrated in the latter stages of Sunday’s race with Perez out in front and Carlos Sainz in between them. Both drivers have been asked about the Monaco Grand Prix in the wake of events in Interlagos last week.

But Perez has rebuffed any questions on the matter, insisting there was no foul play on his part. “Monaco was a long time ago,” Perez said.

“I don’t want to raise any extra speculation. Sometimes you make a mistake in Monaco. You already saw that I almost flew off at Turn 1. I was trying to set a faster time on that Saturday.

“I don’t want to comment further on it or on Sao Paulo.” Perez was also asked for details on what talks at Red Bull behind the scenes were like this week with Verstappen.

“We discussed what happened in Brazil and we went through all the scenarios, so the mistakes we did as a team instead of not preparing the race enough and so on. We want to put all of this behind us and just move forwards.”